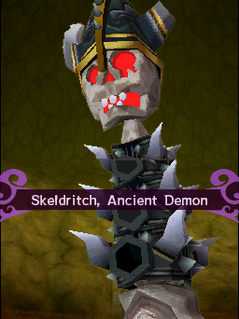 Skeldritch is the Boss of the Sand Temple in Spirit Tracks.[1]

Skeldritch's appearance is very similar to that of Stallord; it appears as a large skull with a spine that rises from the center of a large, ruinous room filled with Sand, although it lacks arms and a ribcage, and it also sports a large, horned helmet. The skull is also more human-like than Stallord's beast-like skull.

Skeldritch attacks by firing Boulders from its spine at Link, who will need to use the Sand Wand to create walls of Sand that will deflect the attacks. He can then use the Sand Wand to push one of the Boulders into one of the four catapults surrounding Skeldritch, then strike a Shock Switch to fire it back and destroy one of Skeldritch's vertebrae. However, the last three vertebrae are protected by armor, meaning that Link must load a Boulder into a catapult, run around the room to make Skeldritch face a different direction, then fire an Arrow at the Switch to launch the Boulder at Skeldritch's exposed vertebrae. Skeldritch will also shoot a laser from its mouth to try and strike Link whenever possible. When merely the skull remains, it will float around the arena and try to ram into Link. If surrounded by a wall of Sand, Skeldritch will attempt to break out, allowing Link to attack the ruby-like weak point on the back of its skull. Alternately, Link can lift himself up using the Sand Wand any time he is behind Skeldritch to reach the Boss's weak point.

After Skeldritch is defeated, the Sand will drain from the room, revealing a Treasure Chest containing a Heart Container and a stairway to a lower room where Link obtains the Bow of Light.