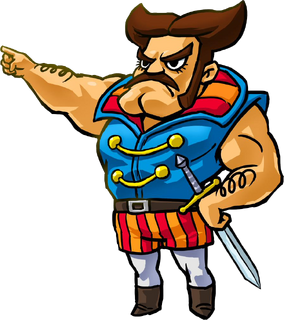 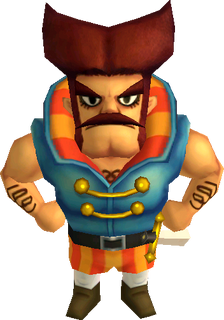 Sir Combsly is a character in Tri Force Heroes.[3]

Sir Combsly is a servant of King Tuft and commander of the Witch-Hunting Brigade of Hytopia.[4] He once had a slickback hairstyle, but it has since collapsed.[5]

After Link is spotted by Madame Couture's Apprentice and recognized to have the same features as the fabled Tri Force Heroes, he is sent to meet with Sir Combsly in Hytopia Castle. Sir Combsly recruits him into the Witch-Hunting Brigade upon seeing that his features perfectly match the legendary Three Noble Attributes of Courage.[6][7] He gives him some Hytopian Silk so he can tailor his uniform, the Hero's Tunic, at Madame Couture's.[8]

Sir Combsly will congratulate Link whenever he opens a new Area of the Drablands. After completing the Woodlands Area, he will inform Link that he has been summoned by King Tuft. Link can also speak with Sir Combsly whenever he wishes to change his name that is displayed during Multiplayer.

After the Link defeat Lady Maud and craft the Lady's Ensemble needed to lift Princess Styla's curse, Link enters the Castle wearing the Outfit, but Sir Combsly does not recognize him at first.[9] Madame Couture had told him of the Outfit earlier, and he tells Link to lift the curse off of Styla right away. After Styla's lift is cursed, the town holds a big celebration. Sir Combsly demonstrates his strength during the celebration by lifting both King Tuft and Link, forming a Totem. After the festivities are over, he tells Link that he should go see King Tuft for his promised reward.

Sir Combsly's name most likely derives from a comb, a fashion-oriented object for styling hair.