"The most skilled Zora fighters wield this spear. Its beautiful fish-tail design belies its impressive strength; the spearhead can pierce even the toughest scales."
— Hyrule Compendium

The Silverscale Spear is an item from The Legend of Zelda: Breath of the Wild. It is a Zora spear with an attack power of 12, though this can be increased by certain weapon bonuses. The spear can only be wielded by the most skilled Zora fighters, even though Link can find and equip it as well. One can be obtained in the water flowing underneath Zora's Domain by using the Magnesis Rune.

Some of the Zora Guards such as Bazz, Rivan, and Tottika wield Silverscale Spears. A Moblin in the Dining Hall of Hyrule Castle wields one as well.

"There was once a giant Octorok in Hateno Bay, large as a mountain, which terrorized the village's fishers. Hearing of their distress, Prince Sidon went forth to personally eliminate the offending Octorok. But this Octorok was a tricky beast. After the prince dodged one of the stones it spat, it inhaled him whole. Such had been the fate of many strong warriors who went to slay the Octorok. Not one had come back alive. Just as it seemed Prince Sidon would be counted among them, the giant Octorok twisted in pain. The tip of a Silverscale spear pierced the Octorok's stomach from within, revealing itself as the source of the beast's agony. Incredibly, Prince Sidon had fought his way out by stabbing his spear over and over into the monster's stomach. Unable to bear the pain, the Octorok coughed up the prince and scrambled to escape. Ever since, the fishers of Hateno Bay have passed down this heroic tale: The Prince Who Slew the Fell Octorok"
— Prince Sidon's Great Escape

In addition to Bazz and Rivan, a Zora Stone Monument reveals Prince Sidon once wielded a Silverscale Spear when he went to combat a gigantic water octorok that was terrorizing the fisherman of Lurelin Village who fished in Hateno Bay and used it to escape from the beast when he was swallowed whole. Sidon pierced the Octorok's stomach from within with his spear and fought his way out by stabbing the spear over and over into the beast's stomach causing the beast such pain that it coughed up the Prince as it scrambled to escape, but was slain by the Zora Prince. As result, the fisherman of Lurelin Village that fish in Hateno Bay pass down this heroic tale known as "The Prince Who Slew the Fell Octorok". To commemorate this accomplishment, the unnamed Zora stonemason apparently had it recorded in the final Zora Stone Monument, "History of the Zora, Addendum 2: Prince Sidon's Great Escape".

Silverscale Spear mounted on the wall of Link's House 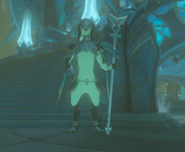 Rivan wielding a Silverscale Spear
Add a photo to this gallery

Retrieved from "https://zelda.fandom.com/wiki/Silverscale_Spear?oldid=541859"
Community content is available under CC-BY-SA unless otherwise noted.