"The Silver Gauntlets won't fit a little kid like you if you try to equip them! I want you to be a good boy and give them to me!"
— Nabooru

The Silver Gauntlets is an item from The Legend of Zelda: Ocarina of Time. These silver-plated gauntlets enhance Link's strength, allowing him to lift rocks and move huge stone blocks when he wears them. The Gauntlets were designed for adults, and, therefore, cannot be used when Link is a child.

When Link completes the first part of the Spirit Temple as a child, a chest appears, which contains the Silver Gauntlets. He was originally supposed to give them to Nabooru in exchange for an unspecified reward; however, Nabooru is spirited away by Koume and Kotake shortly after he retrieves the gauntlets. Link, as an adult, uses these Gauntlets to enter a new section of the temple. After Nabooru is rescued, she lets him keep them.

They are later replaced by the Golden Gauntlets found Inside Ganon's Castle. 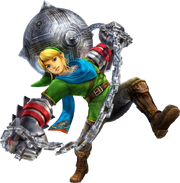 The Silver Gauntlets appear as the first level weapon of Link's Gauntlets moveset. It is used in conjunction with the Ball and Chain, allowing him to throw, lift, and carry it with ease due to the Gauntlets enhancing his strength. The gauntlets have receive a slight design change, as they are bigger than Link's hands and forearms.

Retrieved from "https://zelda.fandom.com/wiki/Silver_Gauntlets?oldid=480614"
Community content is available under CC-BY-SA unless otherwise noted.