This article is about the item in Breath of the Wild. For the Recovered Memory named after it, see Silent Princess (Memory). 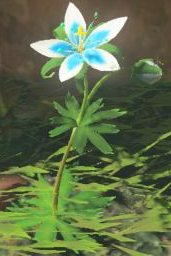 Silent Princesses are recurring Items in The Legend of Zelda series.[1][2]

During Breath of the Wild, Link can find Silent Princesses growing near Great Fairy Fountains across Hyrule Kingdom. The Silent Princess can be used in a dish or elixir for a Stealth Boost effect. They can also be made into White Dye at the Kochi Dye Shop.

Married couple Tye and Sorelia can be found searching for the Silent Princess.[6] There is a legend if you swear your love on one, you will live a charmed life with your partner.[7] However, they've been unsuccessful in their quest.[8]

Flowers in The Legend of Zelda series
Community content is available under GNU Free Documentation License unless otherwise noted.
Advertisement