Shrouded Stalfos are recurring enemies in The Legend of Zelda series. They are Stalfos draped in heavy cloaks, making them slower than the standard Stalfos. They do not usually go armed; their only way to damage Link being if he should bump into them, but in some instances, they wield swords and shields.

When armed, Shrouded Stalfos either wield swords or bows. They are, however, slower due to their heavy garments. Because of this, Link can easily ambush and defeat them with his sword.

Shrouded Stalfos are essentially identical to their Link's Awakening counterparts, though they do not carry shields.

In the episode "The Ringer", Ganon hatches a plan to steal the Triforce of Wisdom and enters himself into a Magicians' contest to be held in Hyrule. Summoning four Stalfos from the Evil Jar, Ganon disguises himself as a hooded magician, and the Stalfos as his shrouded servants. Their identity is later revealed as Ganon steals the Triforce, but are defeated by Link and Princess Zelda. 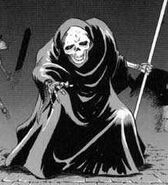 Retrieved from "https://zelda.fandom.com/wiki/Shrouded_Stalfos?oldid=465818"
Community content is available under CC-BY-SA unless otherwise noted.