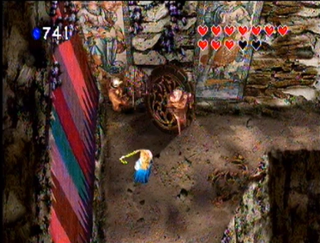 Ursore
The Shrine of Strength is the sixth dungeon in Zelda's Adventure. It is a civilized fortress where challengers test their strength and skill in various contests.[1] Its Shrine Keeper and boss is Ursore.

The Shrine of Strength is located in the Plain of Hobel, southeast of the East Forest.

The Shrine of Strength is unlike other dungeons, as it is a public fortress where people come to sell their wares and to watch challengers test their strength in various contests. At the Shrine entrance is a large square where merchants have set up shop. Zelda can purchase items from a merchant close to the entrance, including a Bouquet for 20 Rupees, a Saltcellar for 10 Rupees, and a Red Bow for 50 Rupees. Only the Red Bow is required for progressing through the Shrine, as the other items have no use. Around the square, Zelda can also find the Shrine's Map by pushing some blocks and receive the Compass after listening to a talkative woman. Thieves also lurk around the square, and will steal Zelda's Rupees when she is distracted. The rest of the Shrine is a single, straight-forward passage to the east of the square where Zelda encounters more visitors and several challenges along the way.

Outside of the square is a Thirsty Child who asks Zelda to draw him some water from the well. He gives her the Gold Necklace Spell for her kindness. Immediately after him is an Archer who invites Zelda to a challenge of shooting arrows at three bears with the Bow & Arrow Spell. After shooting a bear, it turns into a moving barrier that attempts to block Zelda's arrows from hitting the other bears. The Archer gives Zelda some Rupees for every bear she manages to hit. A room south containing switches will reveal the Roar Stick Spell when the upper switch is hit.

Throughout the Shrine are Ursore's Knights, waiting to challenge Zelda to battle and tests of strength.[2][3] Zelda will need to purchase Tickets from Ticket sellers for 20 Rupees each to fight them; the first Ticket lets Zelda fight the Red Knight, and the second Ticket lets Zelda challenge the Blue and Green Knights. The Red Knight challenges Zelda to a battle in a jousting field,[4] and will only appear once the Red Bow is purchased, which was stolen from him.[5] Zelda fights him with the Joust Spell and defeats him. Following the passage, Zelda finds switch and block puzzles along the way, where she must hit a switch from afar to remove Floor Spikes, and push blocks out of the way to proceed ahead. Eventually Zelda challenges the Blue and Green Knights in the Field of the Broadsword to a sword-fighting contest.[6] Defeating them both lets Zelda continue towards Ursore.

In the final stretch to the boss room, Zelda must defeat a pair of Iron Knuckles before finally facing Ursore. After defeating him, Zelda retrieves the sixth Celestial Sign.