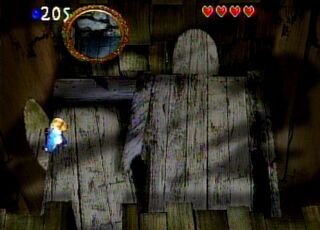 The Shrine of Illusion is the second dungeon in Zelda's Adventure.[name reference needed] It is a maze-like Shrine with strange and surreal rooms, and is described as a place of festival.[1] Its Shrine Keeper and boss is Pasquinade, a werewolf-like jester.

The Shrine of Illusion is located in the northwest of the Forest of Torian, whose entrance takes the appearance of a white carnival tent with the Shrine's Celestial Sign symbol imprinted.

The interior of the Shrine of Illusion is an odd mixture of circus-like and haunted house-like rooms. Its rooms are designed with trickery and deception in mind,[2] with maze-like halls, a dark corridor, a disappearing and reappearing bridge, slippery surfaces, and numerous fake doors. It is also home to several magical and tricky enemies, some of which can only be defeated by certain Spells.

In the entrance of the Shrine is a floating mirror. Zelda falls down a trap door and down a slide as she approaches it, dropping her into the Shrine proper. The next room contains a trio of Stalfos which defeating opens two doorways. The left split takes Zelda to three more doors, some of which are fake. A Key can be found in the room south of them, however it appears to have no use. The middle door leads to a room where the Dungeon map is found, and exits to another room where a Pols Voice is fought. The upper split in the Stalfos room leads to this same room. Defeating the Pols Voice, which requires the Noise Spell, opens another door to the rest of the Shrine.

After crossing a room with a disappearing and reappearing bridge, Zelda enters a tent-like room with Wizzrobes and earns the Compass from defeating them. North from there is a room with an enormous pit and slippery floors, requiring Zelda to walk carefully as two Wizzrobes attack from afar. The room leads to a corridor with checkered floors, where a swarm of Patras guard a Black Orb. Zelda must carry this Black Orb to a multi-colored room in the east, where she must place the orb in a cup to open a door. The door leads to a tent with a pair of Goriya, which drop the Knife when defeated. This Knife is used to cut a hole in the tent's tarp. Eventually Zelda comes to a multi-colored tent where she first encounters Pasquinade, but he flees. The room after him is a pitch dark maze filled with Stalfos, which Zelda can light with a Candle. This maze leads to another room with Stalfos, and a Floor Spike blocking a door, which is only removed by defeating the Stalfos.

Zelda then enters a wicker room where she fights a group of Molluskas, which leave behind a Key that opens the door east. After crossing several more straight-forward rooms, Zelda encounters Pasquinade again in the boss room. Defeating him earns Zelda the second Celestial Sign.