Zelda Wiki
Register
Don't have an account?
Sign In
Advertisement
in: Mountains, Shrines, Locations, Locations in The Wand of Gamelon 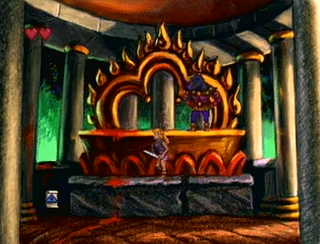 The Shrine of Gamelon is a location in The Wand of Gamelon.[1] It is unlocked after completing Gobiyan Ship.

The Shrine of Gamelon is located in a mountainous region in western Gamelon, part of the island's mountain stretch. The small Shrine sits on the summit, which houses the titular Wand of Gamelon inside. Statues resembling the Buddha also appear along the mountain sides. The climb to the Shrine is made difficult due to the mountains' sloped roads and high number of Phyrandaii which come cascading down the mountain, along with numerous Deadites that attempt to assault Zelda on her way up. Impa also appears close to the mountain base, who reveals through the Triforce of Wisdom that the minion Omfak is guarding the Shrine and the Wand.[2]

Inside the Shrine Zelda faces the shape-shifting Omfak. Upon his defeat, the Wand of Gamelon is revealed. A Triforce Map in the corner takes Zelda back to the world map screen.

Mountains in The Legend of Zelda series
Community content is available under GNU Free Documentation License unless otherwise noted.
Advertisement