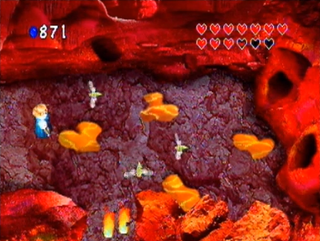 Warbane
The Shrine of Fire is the seventh dungeon in Zelda's Adventure, and the final dungeon containing a Celestial Sign. It is set inside a volcano in Tolemac, within its volcanic region of the Forest of Canvula. Its Shrine Keeper and boss is Warbane.

After completing the dungeon, Zelda is immediately sent to the Vision Henge, where she fights the Shrine Keepers again and eventually Ganon.

The entrance to the Shrine of Fire is inside a cave of the volcano in the Forest of Canvula.

The Shrine of Fire is set inside the cave veins of a fiery volcano. Its walls and floors are a scalding red, and numerous fire pits and pools of lava can be found within. The cave is guarded by the dragon Warbane, who had previously ran a locksmith forge with a couple from Great Wimbich.[1] After joining Ganon's service, Warbane had built his own lair, which became the Shrine of Fire.[2] Warbane's lair doubles as a forge, and a pair of malicious Blacksmiths work there, who will attack Zelda on sight.[3] The dungeon is the shortest of the Shrines in Tolemac, and follows a single, straight-forward line.

At the beginning, the Shrine's tunnel leads to a pair of rooms containing numerous anvils, where the enemy Blacksmiths do their work. One of them will drop the Compass after being defeated. A group of dragon-like enemies in the following cavern leave behind the dungeon's Map. Another group of these enemies must be defeated to clear a barrier of flames, leading to a tunnel where fire balls propel themselves at Zelda.

Eventually Zelda enters the second half of the dungeon, after defeating a swarm of Loccasins to dispel another barrier. Here she encounters Warbane next to some withered trees. He threatens her before disappearing, leaving behind the Hammer Spell. Following the rest of the dungeon, Zelda continues to fight more enemies to remove their fire barriers - which includes a Kannis and two Bollas in two separate rooms.

Towards the end of the Shrine, the volcano's fiery tunnels transition into a steel chamber with metallic flooring. Zelda fights the Shrine's mini-boss, Maxus, in a room of moving Floor Spikes. The Floor Spike blocking the entrance to the boss room is removed after he is defeated. After fighting and defeating Warbane, Zelda moves to collect the final Celestial Sign, but is stopped by Ganon who then sends her falling into his realm in the Vision Henge.[4]