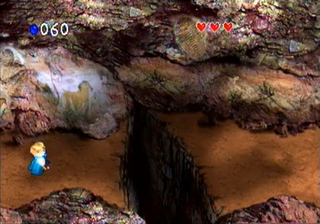 Llort
The Shrine of Earth, also known as the Shrine of Rock,[1] is the first dungeon in Zelda's Adventure. The Shrine is an underground tunnel where the greedy troll, Llort, hoards his treasures.[2]

The Shrine of Earth is located in one of two caves in the south of the Forest of Ogbam, next to a red willow tree. At the beginning of the game, Shurmak gives Zelda a clue to its location with a riddle.[3]

The Shrine is set inside a large cave tunnel lit by torches, with several rock formations in the background and foreground. A deep chasm in the first hall prevents Zelda from going any further, unless she has the Ladder to cross the chasm with. In the center of the dungeon is a fork in the road that leads to the other tunnels in the north, south and east. The dungeon Map can be found in the fork after defeating the Tektites, and the Compass is found south from it after defeating the Keese. Although while the dungeon Map shows dead ends in the south and east, the southern road actually connects to the eastern tunnel, and one of the caverns east connects to the northern tunnel. A single cavern in the north hall is pitch dark, which Zelda can use a Candle to light.

Hidden in the north, south and east tunnels are three Sardaks, Llort's minions who Zelda must defeat to dispel an electric barrier barricading the boss room where Llort is. They can only be harmed with the Jade Ring Spell, which is received from a Talking Chest in the south tunnel. The red Sardak can be found in the south tunnel close to the Talking Chest, the blue Sardak is found in the east tunnel, and the orange Sardak is in the north tunnel. After defeating all three Sardaks, the barrier is dispelled, allowing Zelda to enter Llort's treasure chamber where he is fought. Defeating him earns Zelda the first Celestial Sign.

The Red Boots, which are required to cross the northern river in the Plain of Andor, can also be found in the northern tunnel.