Zelda Wiki
Register
Don't have an account?
Sign In
Advertisement
in: Items, Shovels, Items in A Link to the Past,
and 9 more 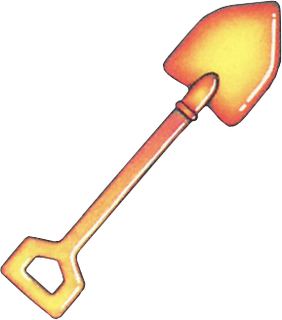 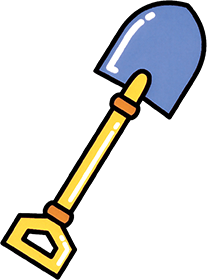 Mole Mitts
Digging Mitts
The Shovel,(ALttP | LA | OoS | OoA | FSA | PH)[1] also known as the Deluxe Shovel,(LA)[2] is a recurring Item in The Legend of Zelda series. It is used to dig up treasures and, occasionally, even enemies from beneath the soil. The Shovel may also be used to unearth secret holes that lead to otherwise unreachable passages.

In A Link to the Past, the Shovel is given to Link by the Flute Boy in the Haunted Grove.[3] Its primary use is to find his hidden Flute.[4] After finding the Flute, it will replace the Shovel. In the Dark World's Digging Game located southwest of the Village of Outcasts, the game keeper will lend Link a Shovel usable only for the duration of the Mini-Game.[5]

In the Game Boy Advance version, the Shovel has its own item slot and is thus usable throughout the game.

In either case, using the Shovel on a tile of plain land will dig a hole. Most of the time, the hole contains nothing, but occasionally, Link may find rupees and hearts. The Digging Game even contains a Piece of Heart which can be dug up from random locations within the game area. Using the Shovel on a tile impossible to dig, or a hole already dug, will make a "hard object" sound, indicating that there is nothing to dig.

The Shovel can be purchased from the Town Tool Shop in Mabe Village for 200 Rupees in Link's Awakening. It is used to find the Slime Key at the end of the Pothole Field. It can also be used to find some of the Secret Seashells which are scattered across Koholint Island. It, among other items, can also be traded at the end of the Trading Quest to obtain the Boomerang.

The Shovel is required to find the Star-Shaped Ore needed to enter the Summer Tower of the Temple of Seasons in Oracle of Seasons. Link can also dig up enemies such as Podoboos.

In Four Swords Adventures, the Shovel can be upgraded to the Level 2 Shovel by throwing it to a Great Fairy. The upgraded Shovel differs from the original in that it chimes whenever Link stands over treasure, a hidden passage, or other hidden secrets.

In Phantom Hourglass, Link can find the Old Wayfarer's Shovel in the man's hideaway on Molida Island.[6][7][8] It is mostly used to uncover hidden passages. It can also be used to unearth special, but not always marked, digging spots containing valuable treasures such as big Rupees or treasure maps.[9] It can also unearth Updrafts that, when unblocked, can elevate Link to higher elevations.[10] The Shovel is also used in the Digging Game on Harrow Island, where Link can dig up ten treasures for the price of 50 Rupees.

In Freshly-Picked Tingle's Rosy Rupeeland, Tingle can buy the Shovel from Duke in the Lon Lon Meadow. When equipped, the weight of the Shovel will cause Tingle to walk slower. To dig, Tingle must be tapped on the touch screen. Only soft ground can be dug. It can be used to dig up multiple items, such as Ingredients, Treasure Chests, and Rupee Goods.

Shovels are equipment that allow Cadence, Link, Yves, and Zelda to dig through walls and mounds of dirt within Cadence of Hyrule, revealing Treasure Chests and opening up new pathways in order to navigate their way through dungeons.[11] However, they have a limited lifespan as using them to dig costs durability, and using up a Shovel's durability completely will cause it to wear out and disappear from the hero's inventory. The durability of a Shovel can be preserved indefinitely with the Glass Ring of Preservation when it is equipped.

There are different types of Shovels with their own special abilities, including the Auto-shovel, Battle Shovel, Glass Shovel, Shovel of Courage, and Shovel of Stamina.

The basic Shovel can either be bought from a Shopkeeper for 10 Rupees or found as loot from red Treasure Chests and slain enemies, though a free Shovel will always appear in the cave next to Link's House, having originally been left behind by Cadence after waking Link up from his enchanted slumber.

Shovels in The Legend of Zelda series
Community content is available under GNU Free Documentation License unless otherwise noted.
Advertisement