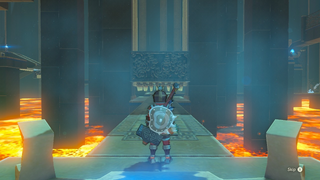 The Shora Hah Shrine,[1] designated by the Trial name Blue Flame,[1] is an Ancient Shrine in Breath of the Wild.

The Shora Hah Shrine is located inside the crag of the Isle of Rabac. It can be reached by taking a Mine Cart from the Abandoned North Mine, which follows a rail that curves toward the Isle. This Mine Cart is propelled using Remote Bombs. Alternately, the Ancient Shrine can also be reached by gliding down to it using the Paraglider from a nearby elevated point. As Link enters the Ancient Shrine, he is greeted by its Monk, Shora Hah.[2]

Shora Hah Shrine consists of a single massive chamber filled with a pool of lava beneath its walkways. Inside the Ancient Shrine, Link encounters a spiked steel block that is blocking the way forward. This block can be hoisted up using the Magnesis Rune. On the other side is an unlit Blue Flame Pedestal}}. The left path leads to two raised platforms that can be reached by making a bridge by moving the steel blocks across the rail. On one of the platforms is a Treasure Chest containing a Royal Bow.

From the walkway, Link must light an Arrow and fire it at the moving platform's Blue Flame Pedestal to make stairs raise. These stairs lead to a Switch that lowers a cylindrical ramp that drops a giant Spiked Boulder. The ramp leads to an enclosed area with a group of Guardian Scouts I. Two Treasure Chests here collectively contain a Great Flameblade and a Giant Ancient Core. Lighting the Pedestal here opens the way to another area with three more Blue Flame Pedestals. Two of the Pedestals have Water spouts that will douse the flames if lit, requiring that Link suspends one with Stasis and quickly lights both of them.

The following area has three Blue Flame Pedestals, two of which are on moving platforms that move between Water streams. Link must light both moving Pedestals at once by firing a lit Arrow when they are close. Successfully doing so creates Updrafts allowing Link to glide to the next area. There, Link finds two more Pedestals. One is on a movable metal block on a rail that must be moved to the other end, but has a Water spout in its path. Link may suspend the Water spout with Stasis and quickly move the block over with Magnesis.

Alternately, it is possible to move the block over first and then light its Blue Flame Pedestal with a lit Arrow. This brings the lit Pedestal to the final walkway, which can otherwise only be reached by riding the Updraft in-between. Two nearby Treasure Chests sit on ledges which can be reached by using the Updraft. They collectively contain a Silver Rupee and a Forest Dweller's Sword.

The final walkway has three Guardian Scouts II. The walkway leads to another torch and a Chest containing 10 Ice Arrows. Just ahead of the Chest are a group of seven more Blue Flame Pedestals that have Water spouts pointed at them. Link must light all seven Pedestals at once by using a Spin Attack with a lit Weapon in order to open the final door.

At the very end of the Ancient Shrine awaits the Monk Shora Hah, who presents Link with a Spirit Orb for completing the trial.[3] He then wishes Link well before fading away.[4]