This article is about the recurring Mini-Game in The Legend of Zelda series. For other articles, see Gallery (Disambiguation). 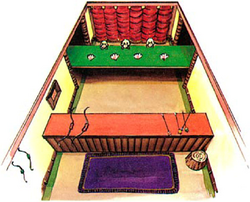 Shooting Gallery artwork from A Link to the Past

In A Link to the Past, the game is found inside a small shop south of the Village of Outcasts, and involves shooting small octopus-style targets as they move from right to left, while a row of hands blocking the targets moves left to right.

Link gets 5 arrows per game. Targets are worth 4 rupees, with the reward doubling for each target hit in a row, up to 64 rupees for the 5th hit (totaling 124 rupees). If the same target is hit with all 5 arrows, the 5th hit will give 99 rupees instead of 64.

In Ocarina of Time, the Shooting Gallery is situated in the Market, but moves to Kakariko Village after Ganon's takeover. To win, Link must successfully shoot all ten Rupee-shaped targets in succession, some of which move, using fifteen shots. If Link hits at least eight targets, he will be given a free retry.

As a child, by using the Slingshot, the targets come up in a fixed order. The first time Link shoots every single one, he will receive a large Deku Seed Bag, and subsequent wins will grant 50 Rupees.

As an adult, by using the Bow, the prize is a larger Quiver, but the targets appear in a random order. Adult Link can play even before he gets the Fairy Bow from the Forest Temple, although he will only win 50 Rupees for completing it.

In Majora's Mask, there are three archery games. One is found in East Clock Town under the title of Clock Town Shooting Gallery. In this game, red and blue Octoroks jump out of the water. The red ones must be shot for one point each; the blue ones, however, will cause the remaining amount of time to lower.[2] By beating the high score of 39, Link will receive a larger Quiver.[3] The true goal of the game is to attain a perfect score of 50 red Octoroks, which will be rewarded by a Piece of Heart.[4]

The second game is found in the path to the Southern Swamp, called the Swamp Shooting Gallery. Slightly more difficult than the Clock Town Shooting Gallery, the Swamp Shooting Gallery involves shooting Deku Scrubs, Guays, and Wolfos, all of which are constantly moving in various formations.[5] When a perfect score is achieved, a larger Quiver is earned.[6] Achieving this once more results in a Piece of Heart, though Link must actually attain over 2200 points for the Piece of Heart, otherwise only a Red Rupee is earned.

The third Shooting Gallery is sponsored by Koume from the Swamp Tourist Center, after Link clears the Woodfall Temple. He must shoot Koume's hanging target at least 20 times to win a Piece of Heart (an Empty Bottle in Majora's Mask 3D),[7] while avoiding shooting Koume herself.[8][9] The mini-game is set during the boat ride across the Southern Swamp.

As part of their daily attractions, Honey and Darling's Shop includes a target-shooting game on the Final Day in East Clock Town. It can be played as Link or Deku Link using either the Bow or Magic Bubbles,[10] respectively. This Shooting Gallery is slightly different in that it is one part of a three-part game.

In Oracle of Ages, the Shooting Gallery appears in Lynna Village in the past. The game consists of hitting a ball with Link's Sword so it hits certain blocks which give points. The Fairy Blocks are worth 100 points, Blue Blocks are worth 30 points, Red Blocks are worth -10 points, or if Link misses or hits an Imp Block, it is -50 points. It is also the easiest and fastest way to earn Gasha Seeds or Magic Rings.

The Goron Shooting Gallery is located in the Rolling Ridge in the past. The game and rules are the same as in Lynna Village. If Link can manage to get 100 points after 10 rounds, he will will receive the Lava Juice. The Boomerang can also be obtained afterwards.

In The Wind Waker, after obtaining the Hero's Bow, Link can throw All-Purpose Bait to a Fishman to persuade him to participate in a shooting game, where he claims he could use some acupuncture.[11][12] Link will be given 10 Arrows and must shoot the Fishman as he jumps in and out of the sea.[13] For each hit he lands, he will earn 10 Rupees, receiving 200 Rupees as a reward if he does not miss any hit.[14]

In Four Swords Adventures, the Shooting Gallery game is run by a Mage in the Village of the Blue Maiden. The Links have 10 Arrows to shoot Force Gems in order to gain them while at the same time targets shaped like Octoroks move from right to left in an attempt to stop the Arrows.

In Phantom Hourglass, after obtaining the Bow, Molida Island will house a Shooting Gallery run by Romanos. This version of the Shooting Gallery slightly varies from its previous counterparts in that the score for successfully shooting a target is not fixed; rather, upon shooting the first target, one gains 10 points. The second successive target shot will get 20 points, and so on until the maximum of 50 points is achieved. Missing a target, or shooting the little girl target, will reset the scoring back to 10 points. The rewards for achieving a high score include a larger Quiver and a Heart Container after obtaining 2000 points. Afterward, Ship Parts will be awarded for high scores.

In Skyward Sword, an archery mini-game run by Fledge called the Pumpkin Pull appears in front of the Sparring Hall. Rewards include Rupees, Treasures, and a Piece of Heart.