Zelda Wiki
Register
Don't have an account?
Sign In
Advertisement
in: Cliffs, Locations, Locations in The Faces of Evil 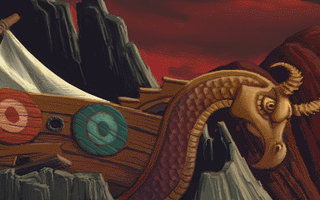 Shipwreck Cliff is a location in The Faces of Evil.[1] It is unlocked after completing Firestone Lake.

Shipwreck Cliff is a mountain peak with a giant viking-style ship lodged in its crater. It is located in eastern Koridai. Although isolated from water, the ship is now seized by Ganon's minions and is being used as a prison. As Link enters the wreckage, he is immediately attacked by Arpagos and Moblin Spearthrowers. On the head of the ship's dragon-shaped bow is a Key, which unlocks the cabin door at the ship's stern. There Link finds the imprisoned Kulvan's Daughter. She thanks Link for saving her, and rewards him with a kiss and a Life Heart. She also requests that Link save her captured father as well.

A hole in the ship's cabin exits to a large chasm, which can only be crossed by using the Winged Helmet. Link then climbs down the mountain side, which notably depicts the island's Faces of Evil on its walls. At the bottom is a cave where Kulvan is chained. He asks Link to cut his chains as the Arpagos of the area are driving him insane. After freeing Kulvan, he gives his thanks and asks Link if he has a Fire Diamond. With it, he tempers Link's Power Sword into a stronger form, capable of shooting Power Blasts at any time. A Triforce Map in the cave exits the stage. After the stage is completed, Lupay is unlocked.

Cliffs in The Legend of Zelda series
Community content is available under GNU Free Documentation License unless otherwise noted.
Advertisement