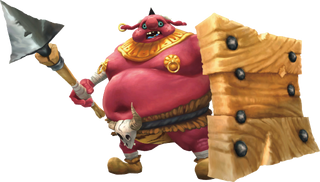 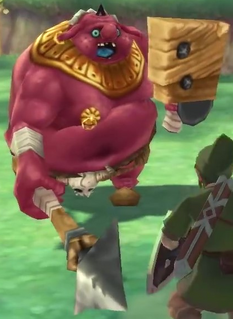 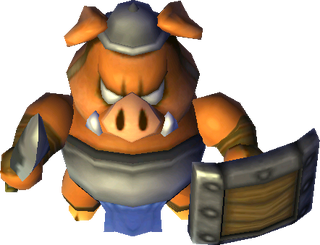 Skyward Sword
A Link Between Worlds

Sword
Shield Moblins are recurring Enemies in The Legend of Zelda series. They are a variant of the Moblin which carry large Shields they use to defend with, and are often paired with spears.

Moblins carrying Shields in general have appeared in a few Zelda games, such as the Sword Moblins of Link's Awakening and the armored Moblins of A Link Between Worlds, but are not necessarily referred to as Shield Moblins by name.

In Skyward Sword, Moblins appear as corpulent red monsters twice the size of Link. Their brute strength and durable Shields they carry makes them considerably dangerous enemies. Shield Moblins begin to appear after the trial at Farore's Silent Realm is completed. They can be then found in Faron Woods, Lanayru Desert, Eldin Volcano, Skipper's Retreat, the Sky Keep, and during the Horde Battle.

Shield Moblins come in two variants in Skyward Sword, both equipped with spears and Shields.

Wooden Shield Moblins brandish a wooden, square-shaped Shield and a long wooden spear. Its only attack is stabbing Link with its spear. Link can cut its shield down into small pieces with his Sword, leaving the beast defenseless and open for attack. The Moblin can counterattack this if it turns its Shield and Link strikes it. However, after the Shield has been cut down, it will become enraged and use both hands to swing its spear at Link aggressively, and also charge at Link (if he keeps his distance) while using its spear as a jostling vault. Link can also jump behind the Moblin by dashing onto its Shield and climbing over it, jumping over and exposing the monster's behind for an attack. After a Moblin is defeated, it will tumble forward; if Link stands too close to the Moblin when it falls, he will be knocked back by the Moblin's heavy body, but will not be damaged.

Later in the game, a second variety of Moblin known as a Metal Shield Moblin appears. They carry an iron Shield that cannot be cut down by Link's Sword and is impervious to Bombs, requiring that Link climb over the Shield in order to attack its backside. They are also more heavily armored and wear an iron helmet, and take more hits to defeat. This type of Moblin is rare, but Link has to face two of them at once on a bridge in the Sky Keep as part of a long battle sequence.

Shield Moblins appear similarly to Spear Moblins, but are more heavily armored. They only appear in Lorule and behave similarly to Sword Soldiers such as seeking out and chasing Link upon detecting him. Unlike Sword Soldiers, the moblin shield is much more effective and thus they are more difficult enemies. Their shield can only be destroyed by Master Sword Lv2 and Master Sword Lv3, though a hookshoot can remove it. The regular Shield Moblin variant has a blue loincloth and a machete like sword, whilst the more powerful variant has a red loincloth and a two pronged spear.

In Nintendo Land, Shield Moblins and Helmet Moblins are enemies that appear in the Battle Quest attraction, bearing the likenesses of Moblins equipped with Shields. Helmeted Moblins are similar to Shield Moblins, but wear pots on their heads as helmets for extra defense. It is possible to break the Moblins' Shields with a Sword strike. They also come in varieties, with red being the second strongest and purple being the strongest.

In Hyrule Warriors, Moblins based on the Shield Moblins from Skyward Sword appear as powerful, elite Captains. They come in wooden and iron Shield variants, the former of which is simply referred to as a Moblin, and the iron Shield variant called a Shield Moblin. Both variants behave and attack identically; they carry wooden spears they use to attack with, but unlike those of Skyward Sword, they do not actively defend themselves.

Moblins will attack either by thrusting their spears as a javelin, or charge a powerful attack where they spin around furiously before tumbling onto the ground. Their fall, and subsequent shock wave, can potentially inflict massive damage onto surrounding enemies caught in the fall. Doing so, however, also leaves them vulnerable and exposes their Weak Point Gauge. Moblins may also simply throw themselves to the ground without spinning, which will still expose their Weak Point Gauge. Moblins and Shield Moblins in Hyrule Warriors are highly resilient enemies, making them difficult to contend with.