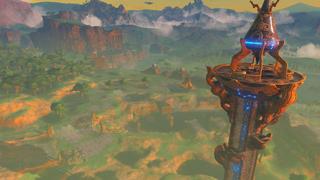 Overhead view of a Sheikah Tower

Sheikah Towers are tall, ancient structures that are found scattered across Hyrule Kingdom. They were built to detect signs of Calamity Ganon's revival, and emerge from the ground when fed Ancient Energy.[2] When activated, these Towers glow with a bright blue and their pronged tips will split open like a satellite. After being awakened from his deep sleep at the Shrine of Resurrection, Link is soon guided by a disembodied voice to a Sheikah Slate Terminal at a monument in the northeast of the Great Plateau. Upon placing the Sheikah Slate into the Sheikah Slate Terminal, all of the Sheikah Towers rise from the ground all over Hyrule Kingdom and await activation.[3] The Great Plateau Tower rises where Link is standing. Upon activating the Great Plateau Tower, all of the Ancient Shrines also begin to glow orange and await activation.[4]

Sheikah Towers may be climbed by gradually scaling their wicker walls with platforms provided in-between elevations so that Link may rest. Sheikah Towers often have obstacles that prevent Link from climbing them directly, such as Malice, spiked vines or various enemies. These can be scaled by using Revali's Gale. At the top of every Sheikah Tower is a Sheikah Slate Terminal where Link can install data onto his Sheikah Slate, which gives him a detailed Map of the surrounding area.

There are 15 different Sheikah Towers scattered throughout Hyrule Kingdom. Some Regions of Hyrule Kingdom, such as Necluda and Gerudo have multiple Towers within them.

Out of all of the Sheikah Towers, it is the only one that doesn't have any major obstacles in the way of ascending it. It is also in direct view of Hyrule Castle being one of the closest Towers to the Castle.

The Central Tower is found in Hyrule Field in Central Hyrule. The Central Tower is southwest of Hyrule Castle near Mount Daphnes. Approaching the Tower from the east through the Hyrule Garrison Ruins requires avoiding or defeating two Guardian Stalkers while the base of the Tower is surrounded by three Decayed Guardians. Scaling the Tower involves jumping from platform to platform to avoid the Decayed Guardians below if he has not defeated them.

The Ridgeland Tower is found in the Hyrule Ridge in Central Hyrule. The Tower is to the west of North Hyrule Plain and southeast from the Thundra Plateau.

The Ridgeland Tower sits in a lake filled with Electric Lizalfos and Electric Wizzrobes. Scaling the Tower requires Link to either avoid the enemies below, lest he fall off the Tower, or to defeat them before he ascends.

Atop the Tower sits Branli, a Hylian researcher who studies the Rito. He was standing in the middle of the lake as Link activated the Great Plateau Tower and got stuck on the Ridgeland Tower.[7] For 20 Rupees, he will let Link play a mini-game where he jumps off the Ridgeland Tower to glide out as far as he can with his Paraglider. If he makes it far enough, Branli will reward Link with a Silver Rupee.

The Woodland Tower is found in the Great Hyrule Forest in the Eldin Region. It is north of the Military Training Camp and south of the Lost Woods. The Tower has a large stone skull on top of it covering a large portion of its view.

The Hebra Tower is a Sheikah Tower in Tabantha Frontier in the Hebra Region. It is located north of the Tabantha Village Ruins. The bottom of the Tower is surrounded with ice, which can be melted.

The Tabantha Tower is found on Nero Hill in the Tabantha Frontier in the Hebra Region.

The Wasteland Tower is found on Spectacle Rock in the Gerudo Region. It sits within a Bottomless Bog that Link must cross in order to get to the Tower.

The Faron Tower is found in the Bronas Forest in the Faron Region.

The Lake Tower is found in the Faron Region, overlooking Lake Hylia to the north.

The Hateno Tower is found in East Necluda. The sides of this Tower are covered with spiked vines. These vines can either be burned with Fire, or avoided with careful maneuvering.

The Eldin Tower is found in Eldin Canyon in the Eldin Region, south of Death Mountain.

In the Scenario "Destroy the Yiga Clan!", Purah and Robbie find out how to unlock all of the Sheikah Towers around Kingdom of Hyrule. This allowed the Hyruleans to have full knowledge of the geography of their land, including the location of monster outposts and the Yiga Clan Hideout.