Zelda Wiki
Register
Don't have an account?
Sign In
Advertisement
in: Items, Breath of the Wild Pages with Invalid or Missing Terms, Ancient Technology,
and 3 more 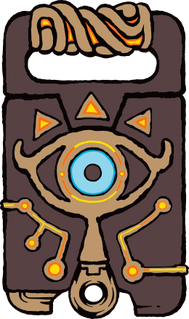 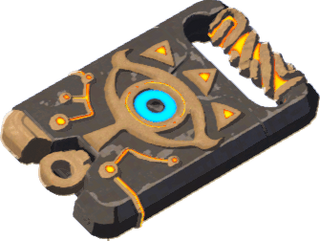 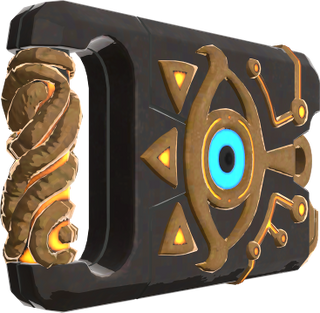 Shrine of Resurrection (BotW)
The Sheikah Slate is a recurring Item in The Legend of Zelda series.[1][name reference needed]

The Sheikah Slate is a multipurpose tablet bearing the Crest of the Sheikah.[1] Link obtains it shortly after being awakened by a disembodied voice in the Shrine of Resurrection. Though Link has no recollection of seeing it before, he finds it familiar.[1] He must first use it to get out of the Shrine of Resurrection.[2] The Sheikah Slate was made specifically for the chosen hero.[3]

The Sheikah Slate is able to receive Runes, a form of information that bestows the device a number of different abilities. They serve as a replacement for traditional items such as Bombs. These Runes can be obtained and installed onto the Sheikah Slate at the four initial Ancient Shrines found atop the Great Plateau.

The Camera Rune, the Album, and the Hyrule Compendium features are unavailable at the beginning, as they are encrypted in Sheikah text.[7] They are restored when the tablet is brought to Purah at the Hateno Ancient Tech Lab. Included in the Camera's Album are 12 Pictures which were taken by Princess Zelda a century prior. Upon completion of the Main Quest, "EX The Champions' Ballad", Monk Maz Koshia gifts Link the Master Cycle Zero Rune.

Before the second Great Calamity, the Sheikah Slate was used to activate the Divine Beasts.[8]

The Sheikah Slate makes an appearance in Super Smash Bros. Ultimate as part of Link's Breath of the Wild Champion Tunic outfit and his Tunic of the Wild. It is mostly only used to summon out a round Remote Bomb and to detonate it.

The Sheikah Slate first appears in the Scenario, "The Battle of Hyrule Field", in Hyrule Warriors: Age of Calamity, when Impa drops it after being chased by a horde of Bokoblins. The Sheikah Slate then awakens the Diminutive Guardian that was on the field lying dormant, and activated a Sheikah Tower in the middle of the battlefield.

The Sheikah Slate is mostly used in battles to use Sheikah Runes such as Cryonis or Magnesis, and the Sheikah Sensor can also be used to find out where objects needed to complete side quests could be found.

The Sheikah Slate has several important roles, such as getting information from the memory of the diminutive Guardian, and activating the Sheikah Towers all over Hyrule, helping them to gain full knowledge of the land, such as monster outposts and the Yiga Clan Hideout.