In order to reach the forest, Impa and Link lead the Hyrulean Forces through the Eldin Caves, only to be attacked by the Dark Forces, led by the evil Wizzro. They are saved by the arrival of a mysterious warrior wielding a magical Harp. The warrior informs them that Zelda is not dead and that she will return. The warrior introduces herself as a Sheikah warrior named Sheik, though this claim is doubted by Impa, who is a Sheikah herself. Regardless, Sheik joins the Hyrulean Forces in combating the Dark Forces and they manage to fight their way through the caves and come upon a hidden village within Faron Woods.

The Sorceress of the Woods

Instead of Zelda, they find that the Hyrulean resistance is headed by a young sorceress named Lana, who informs them that the Dark Forces are being led by an evil sorceress named Cia. She offers to tell them more if they will help her defend the forest from the invading Dark Forces. Link, Impa, Sheik, and their new ally Lana manage to defeat the Dark Forces, including a giant Gohma summoned by Wizzro.

The Sorceress of the Valley

Lana informs them that Cia is using the Gate of Souls in the Valley of Seers to summon monsters to serve in her army and joins Link, Impa, Sheik, and the rest of the Hyrulean Forces in going to the Valley of Seers in order to put a stop to Cia and her army. Despite being allies, Impa remains distrustful and suspicious of Sheik. The Hyrulean Forces manage to defeat Volga and a Manhandla summoned by Cia; however, Link ends up springing a dark Magic Circle that traps him, along with Sheik and Impa. It is then revealed that Sheik possesses the Triforce of Wisdom, which Cia steals along with the Triforce of Courage held by Link, combining them with the Triforce of Power already in her possession. Using the power of the complete Triforce, Cia is able to distort time and space, opening a Gate of Souls in various Eras and transforming the landscape of Hyrule into a mixture of locations from them. Link, Lana, Impa, and Sheik decide to split into three groups, each traveling to one Era in order to close the three gateways.

The Two Sheikah and the Land of Myth

Sheik decides to join Impa's group of soldiers, and they end up on Death Mountain during the Era of the Hero of Time. Still distrustful of Sheik, Impa is puzzled by the warrior's decision to join her and questions them. Sheik claims that Impa is the leader of her Sheikah tribe of origin; however, Impa refutes this, pointing out that there is no one named Sheik in the tribe she leads. Their conversation is interrupted by the appearance of Navi the fairy, who informs them that Goron Chief Darunia has captured and imprisoned Princess Ruto. She explains that Darunia's personality has changed ever since the appearance of a woman calling herself Zelda. Hoping to find more information about this "Zelda", Impa puts aside her misgivings about Sheik and the two lead the Hyrulean Forces in rescuing Ruto from the Goron Forces led by Darunia. Eventually, Sheik discovers that the Gorons are being manipulated by Big Poes and Darunia is restored to normal after he is defeated by the Hyrulean Forces. Wanting to atone for his actions, Darunia releases Princess Ruto, and the Goron Forces join the Hyrulean Forces in confronting the mysterious person claiming to be Zelda at the Water Temple in Lake Hylia.

They are shocked to encounter Princess Zelda leading a army of monsters, though Impa and Sheik believe her to be an imposter and become determined to expose her as a fake, resisting her attempt to dissuade the Hyrulean Force from fighting against its princess. Ruto informs them that the Lens of Truth found inside the Water Temple can see past illusions. Confronting the Fake Zelda together, Sheik and Impa manage to defeat the imposter and Sheik uses the Lens of Truth on her, exposing the imposter as none other than Wizzro of the Dark Forces.

Wizzro questions how they could see through his disguise, causing Sheik to reveal herself to be the real Princess Zelda, to the shock and relief of Impa. Confronted by the real Princess Zelda, Wizzro retreats. After revealing her true identity, Zelda apologizes to Impa for deceiving her, though Impa is simply happy to know that Zelda is safe and joins her in closing the Gate of Souls. Zelda also apologizes to Link and the Hyrulean Forces upon returning from the Era of the Hero of Time, and returns to her position as leader of the Hyrulean Forces, effectively discarding her disguise.

As part of her guise as a Sheikah, Sheik wields multiple kunai and fights using her ninja-like agility, while using smoke bombs to help conceal her movements. Like her Ocarina of Time incarnation, Sheik carries a Harp, which she uses to play magic melodies that produce various elemental effects. She also possesses the Triforce of Wisdom, before it is eventually stolen by Cia.

Dark Sheik is a shadowy doppelgänger of Sheik that appears as enemies in certain Adventure Mode and Challenge Mode scenarios. Dark Sheik uses the same moveset and drops the same Materials as Sheik.

Sheik's "Era of the Hero of Time" outfit 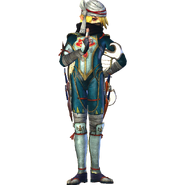 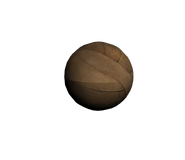 A Smoke Bomb used by Sheik

Sheik introducing herself to the Hyrulean Forces

Retrieved from "https://zelda.fandom.com/wiki/Sheik_(Hyrule_Warriors)?oldid=539959"
Community content is available under CC-BY-SA unless otherwise noted.