Sheik (pronounced /ʃiːk/ sheek), is a recurring character in The Legend of Zelda series.[21][22][23][name reference needed] He appears to be a male Sheikah but is in fact a persona of Princess Zelda.[24] Princess Zelda disguises herself as Sheik for most of Ocarina of Time, revealing her true identity only at the end of the game. Sheik uses his Harp to teach Link several Warping Songs throughout the game.

Sheik reveals himself to Link shortly after Link is freed from the Chamber of Sages after his seven-year slumber.[25] He introduces himself as the "Survivor of the Sheikahs".[1] He informs Link that he must awaken the Seven Sages in order to bring peace back to Kingdom of Hyrule.[26] Alerting him of the need to acquire the Hookshot in order to enter the Temples, Sheik stays in front of the Pedestal of the Master Sword.[27] He later appears when Link arrives at the Sacred Forest Meadow. He tells Link about the Songs for Warping that can access Temples entrances and teaches him the "Minuet of Forest" before disappearing again.[28] Further along, Sheik approaches Link at the Fire Temple entrance in the Death Mountain Crater, teaching him the Bolero of Fire before walking away, using a wall of flame to halt Link's inquiring advance.[29]

Sheik once again mysteriously appears in the Ice Cavern to inform Link of the fate of the Zoras and to teach him the "Serenade of Water".[30][31] He then waits outside the Water Temple for Link to free it from Morpha's influence and awaken the Sage of Water before disappearing once again.

When Kakariko Village comes under attack from a mysterious force, Link discovers that Sheik is already there. Together they encounter and are defeated by an invisible monster thought to be the Evil Shadow Spirit. Sheik teaches Link the "Nocturne of Shadow" and urges Link to help Impa fight the Evil Shadow Spirit.[32] When Link discovers that he must venture back in time in order to do so, Sheik offers a helping hand informing Link on how to use the Master Sword and the Pedestal of the Master Sword in order to travel back and forth through Time.[33] He teaches Link the "Prelude of Light" before vanishing once again.[34]

At the entrance of the Spirit Temple, Sheik appears to have been waiting for Link from atop a large rock formation and once again informs him that he must enter the Temple as a child, utilizing the Pedestal of the Master Sword in the Temple of Time.[35] He gives Link a lesson on performing the "Requiem of Spirit" before using the desert winds as cover to vanish.[36]

With all Six Sages freed, Link is instructed to return to the Temple of Time where Sheik awaits. Sheik congratulates Link on his efforts and offers an explanation on what happened to Kingdom of Hyrule during Link's disappearance before finally revealing his true identity as Princess Zelda.[37][38] 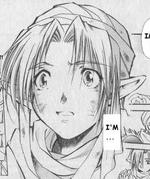 In the Ocarina of Time manga by Akira Himekawa, Sheik first appears to Link having tended his wounds after being defeated by Volvagia. Sheik is a spy for Ganondorf and later shows up to tell Link of a rumor that Princess Zelda had been spotted in the Desert of Illusions, before vanishing again. On Link's way through the Desert, he nearly succumbs to blistering sands before Sheik pulls him out and continues to travel with him. Later that night, Link is attacked by illusions and images of his past, but Sheik is unaffected; Link wonders if it could be due to a lack of past in Sheik's life. Upon reaching the Gerudo's Fortress, Sheik knocks Link out, and the Hero is captured.

Once Link frees himself, he fights through the ranks of the Gerudo, before Sheik comes to him with his Sword and Shield. Throwing them to Link, Sheik attacks the invisible Twinrova, who were watching nearby. They accuse Sheik of being a traitor. Sheik is knocked unconscious after rebuking the accusation.

After escaping with the unconscious Sheik, Link finds a cave to rest in. He leaves to find water, flustered after getting too close to Sheik. He returns to find that Sheik, having awoken with the face wrappings off, appears to be a woman. Fully transforming, Sheik is revealed to be Princess Zelda, who later explains that she had Impa lock her consciousness away and assume the disguise of a Sheikah boy.

Zelda has the option of transforming into Sheik by pressing down the Stick while holding the B Button. Sheik has a completely different moveset than Zelda that are not based on magic, as her moves and weapons are quick and similar to those of a ninja.

She has mostly the same moveset from Super Smash Bros. Melee, and shares a Final Smash with Zelda, the Light Arrows, although Sheik's deals more damage. In addition, Sheik can now crawl, wall jump, and use her Chain move as a tether recovery.

In The Subspace Emissary mode from Super Smash Bros. Brawl, Sheik is first introduced after Solid Snake saves Zelda and Peach when they are captured inside the Halberd. Although he orders them to stay put, Zelda transforms into Sheik to escape along with Peach to the battleship's front deck. Eventually, they reach their destination when suddenly Fox in his Arwing destroys one of the airship's turrets, shooting near where Peach was walking. Thinking that Fox was aiming at Peach, Sheik teleports onto Fox's Arwing and, using her hand, shatters the cockpit window. This forces Fox to eject out of the Arwing and land on the battleship's front deck along with Sheik. Although the two begin to fight, Peach stops them by offering a cup of tea to Fox. Confused at first, Fox looks over to see that Sheik has already begun drinking the tea, thus realizing that Sheik and Peach are not his enemies as he accepts Peach's offer and joins them.

Sheik appears as a playable character in Hyrule Warriors. She appears in the story when Zelda goes missing. Unlike her previous incarnations, Sheik does not go to great lengths to hide her feminine physique.

Sheik uses a Harp as her primary weapon, with which she plays the "Song of Storms" along with the other Songs for Warping from Ocarina of Time. As Sheik performs combo attacks, an elemental Song note will appear beneath her Special Attack Gauge. The notes allows Sheik to perform different charge attacks based on the element. The "Nocturne of Shadows" produces a field of Darkness that paralyzes enemies and damages them. The "Serenade of Water" surrounds Sheik in a shield of Bottled Water that can absorb up to four Hearts worth of damage. The "Song of Storms" produces an electric whirlwind that surrounds Sheik even while moving. The "Bolero of Fire" creates a delayed flame geyser detonation. The "Prelude of Light" creates a field of Light that will regenerate her Special Attack Gauge when standing in it. When activating Focus Spirit, Sheik performs "Saria's Song". When deactivating it in front of a group of enemies, sprouts grow from the ground and suddenly burst into Trees. Sheik's Special Attack has her strum her Harp in rhythm, causing a huge wave of notes on surrounding enemies. She also uses a kunai for basic, quick attacks.

Sheik is later revealed to be Zelda in disguise during "The Water Temple".[40] She had been in disguise to protect her identity from the enemy forces. From this point in the game, Sheik and Zelda both become options for Scenarios. If either Sheik or Zelda are selected as Warriors, Ruto will take Zelda's place as leader of the Hyrulean Army.

Sheik returns in Super Smash Bros. for Nintendo 3DS/Wii U as a separate character, no longer being a transformation of Zelda. Due to this, several new special moves exclusive to the Super Smash Bros. series were added to both characters' movesets. These include the Burst Grenade and Bouncing Fish for Sheik, and the Phantom Slash for Zelda.

In Super Smash Bros. Ultimate, Sheik appears in a redesign based off the Stealth Set from Breath of the Wild with all of her basic move set from Super Smash Bros. for Nintendo 3DS/Wii U but with a different Final Smash. Sheik also appears as a Fighter Spirit that can be obtained by either clearing "Masquerade", Sheik's Classic Mode Route, or by purchasing it from the Shop for G 300.