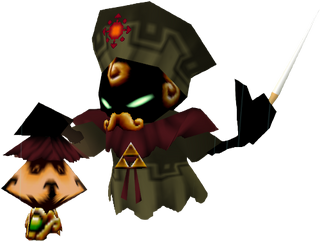 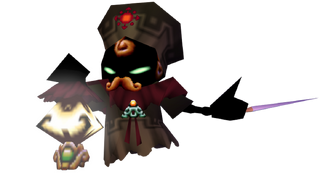 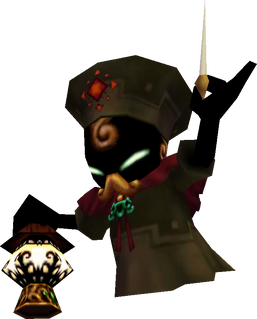 Sharp is a recurring character in The Legend of Zelda series.[2]

In Ocarina of Time, Sharp is one of the deceased Composer Brothers who, during their life, served the Royal Family of Hyrule.[3] He and his brother were known to be great composers because of the many musical masterpieces they wrote. However, they were also on a mission to analyze the hereditary mysterious powers of the Royal Family of Hyrule.[4] Although they could never quite understand the true power behind the Triforce, they completed a study about controlling the flow of time via the use of Ocarinas. Ganondorf then tried to steal the results of their research and threatened to kill them if they did not reveal them. The Composer Brothers, unwilling to let the King of the Gerudo reap the fruits of their research, gave up their lives in order to protect the secret they had spent years researching.[5]

After their death, Sharp and his brother kept serving the Royal Family as Poes by guarding the Graveyard. Their tombstones are located right next to the huge headstone that guards the entrance to the Royal Family's Tomb. Link can speak to the deceased brothers by checking their gravestones, which results in them attacking him. After being defeated and realising that he is not one of Ganondorf's men,[6] they will reveal that they were each studying a song, one to summon the sun and the other to summon the moon.[7] Their combined studies resulted in the creation of the "Sun's Song," which is the secret song they guarded and that eventually led to their deaths. Once Link enters the tomb, he can find the "Sun's Song" inscribed at the end, along with a poem written by the Composer Brothers to accompany the melody.[8]

In Majora's Mask, Sharp is located in the Spring Water Cave at the top of Ikana Canyon. When the land was taken over, he was tricked into selling his soul to the devil.[9][10] Afterwards, he locked up his brother Flat beneath the Ikana Graveyard. Due to Sharp's curse, the Ikana River went dry, causing the Music Box House to stop working and allowing Gibdos to roam the Canyon freely.

Sharp composed a song which has the ability to drain the life from all who listen to it. When Link confronts him, Sharp plays the song, stating that Link will "join the ranks of the dead".[11] The song damages Link as long as he remains in the Spring Water Cave. However, when Link plays the "Song of Storms," the song Flat composed to get rid of his brother's curse, Sharp's soul will be healed.[12] Sharp then tells Link of the curse on Ikana, and how to gain entrance to the Ancient Castle of Ikana.[13]

If Link plays the "Song of Healing", which cures every other spirit in the game, Sharp will react and say how soothing the song is, but quickly regain his demeanor and say it is too late for him to be healed.[14]

Sharp is a musical symbol which denotes a higher pitch. His German name is a reference to the composer Johann Sebastian Bach.