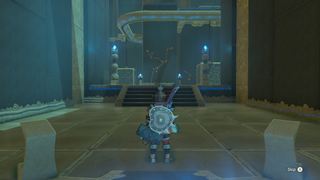 The interior of the Sharo Lun Shrine

Rudania's Emblem
The Sharo Lun Shrine,[1] designated by the Trial name Blind Spots,[1] is an Ancient Shrine in Breath of the Wild. It is exclusive to The Champions' Ballad DLC Pack.

Sharo Lun Shrine is found in Eldin Canyon to the southeast of Death Mountain. It is one of three Ancient Shrines accessed as part of the Main Quest, "EX Champion Daruk's Song".

To access this Shrine, Link must follow a trail of Glowing Rings that appear around the crater of Death Mountain. The first of these Rings appears on one of the peaks east of the Divine Beast Vah Rudania, and another appears ahead after touching the first one. Link must touch each Glowing Ring within their given time frame, eventually leading him to the eastern side of Death Mountain's lava moat.

After reaching the final Glowing Ring, the Sharo Lun Shrine will rise from beneath the ground nearby. Upon entering the Shrine, Link is offered the trial by the Monk, Sharo Lun.[2]

This Ancient Shrine features a series of overhead conveyor belts which carry hanging blocks along the tracks. These blocks are eventually dropped into the abyss below when they reach the end of their track. Link must ride these blocks through the Shrine, all while avoiding the obstacles that try to impede his progress along the way.

Some of the obstacles can be avoided by clinging onto the sides of the blocks, which are covered in mesh. The first track has streams of Fire that block the way ahead. It is possible to pass these obstacles unharmed by wearing the complete Fireproof Armor, provided that its pieces have all been upgraded twice. The second track has a combination of spiked columns and a group of Guardian Scouts I surveying the path, which will try to shoot at Link as he comes near.

The third track transports Link alongside cascading Waterfalls, which can be climbed by using Cryonis to create Ice blocks on the water, and thereby avoid the fire streams ahead. A falling Treasure Chest containing a Great Flameblade can be caught by creating an Ice block beneath it. The rest of the track leads to a second Waterfall, which can again be climbed using Cryonis to reach the Monk Sharo Lun above.

At the end of Sharo Lun Shrine, Link meets the Monk Sharo Lun, who commends his resourcefulness and rewards him with Rudania's Emblem.[3] The Monk then tells Link to collect all three of Rudania's Emblems to reveal a new challenge.[4]