Not to be confused with Dark Link, the recurring Sub-Boss that first appeared in Ocarina of Time and Link's Shadow, the final Boss of The Adventure of Link. 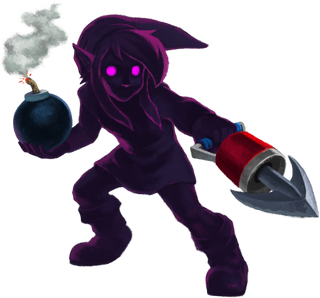 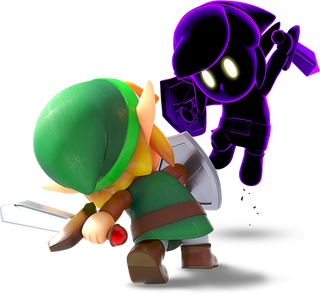 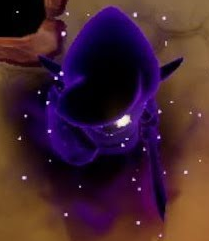 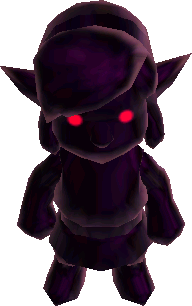 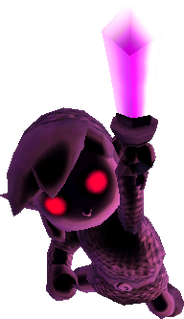 Shadow Links are recurring enemies and Sub-Bosses in The Legend of Zelda series.[3][4] Shadow Link is dark reflection of Link.[2] Hyrule Historia states that the evil thoughts and resentment of Ganondorf, who had been killed by an earlier incarnation of Link in Twilight Princess, manifested through the Dark Mirror in the form of Link.[1] He is possibly related to Dark Link, but has distinct differences in behavior, origin and appearance, making any relationship between them unclear and speculative.

Shadow Link is featured as both a main character and a recurring enemy and boss in Four Swords Adventures. There are many Shadow Links; the Dark Mirror can create an endless supply from Ganondorf's resentment and evil thoughts from his defeat in Twilight Princess,[1] but they all work together as one. He first appears early in the game in the Four Sword Sanctuary and tricks Link into drawing the Four Sword, releasing the ancient Wind Mage Vaati and splitting Link into four Links. He and his copies then plague Hyrule by terrorizing its citizens, some of whom blame the Links for their misdeeds. Shadow Links usually show up repeatedly in each stage, often causing mischief using a certain item, such as setting fires with the Fire Rod, creating stunning shockwaves with the Hammer, or charging at the Links with the Pegasus Boots. Sometimes they will simply taunt the Links by hopping in place and jumping away when they get too close. Defeating a Shadow Link will yield a large green Force Gem, but they will flee to the Dark World if they are not defeated in time or if they evade the Links enough times.

Shadow Link will also sometimes appear and summon a Big Bomb. When this Bomb explodes, all Links on screen will be instantly defeated if they do not take shelter or leave the area before the countdown reaches zero. He will continue to summon an endless supply of Big Bombs until the Links progress through the area.

Shadow Link appears as the main boss in the Cave of No Return, Village of the Blue Maiden, Desert Temple, and The Dark Cloud stages. He will also appear as a Sub-Boss for the Mountain Path, Tower of Flames, Kakariko Village, Desert of Doubt and Temple of Ice stages. During each battle, except for the Dark Cloud stage, Shadow Link will eventually take on a random color, and only the corresponding Link can damage him. During these battles Shadow Link usually travels back and forth from the Dark World and attacks Link with his copy of the Four Sword. Shadow Link and his kin are finally defeated once and for all in The Dark Cloud stage when, while the Links engage them in combat, Princess Zelda undoes the seal on the Dark Mirror and takes it into her possession, dispelling them. Shadow Link also appears as a mini boss on other stages.

In the additional multiplayer game in Four Swords Adventures known as Shadow Battle, four colored Shadow Links battle for supremacy in a number of different arenas. While appearing identical to the four Links of the normal game, they appear in the same manner as Shadow Link and have his voice at the start of battle. During these battles, Shadow Link has the exact same abilities as Link normally would.

Shadow Links appear in A Link Between Worlds, but they do not play a part in the main story and have no known connection to the Dark Mirror or Ganondorf. Once Link has spoken to Gramps and activated StreetPass, and the player has received a StreetPass Hit on their 3DS system, a Shadow Link representing another player's Link will appear waiting in one of various locations around Hyrule or Lorule, and a sign will appear in Gramps' field offering a hint to his location. It will speak to Link and challenge him to battle. Accepting this challenge will cause Link and Shadow Link to be transported to a battle arena where they will fight in a Shadow Link Battle. In this mode of the game, a remix of the Palace Theme from The Adventure of Link plays as a homage to Link's Shadow. Shadow Link is only a representation of the other player, and is controlled by the computer. Its items and gear are determined by those set by the other player when talking to Gramps. The combined might of the items held by Shadow Link adds up to a bounty of Rupees that can be won once Link defeats it, and a number of Challenges can be attempted, such as defeating Shadow Link using a specific Item. The player does not have to pass another person to receive a Shadow Link, as occasionally Shadow Links from a mysterious player named Shade will appear.

Three Shadow Links appear as the bosses of the Baneful Zone in the Den of Trials in Tri Force Heroes. They wield powerful versions of the items that appear in the game, in addition to Swords which will temporarily Curse Link upon dealing damage. Their items are chosen randomly, thus requiring a different strategy every time the Shadow Links are fought. They will each aggressively pursue the Links as they attack. However, ranged weapons are very useful in this battle. Each Shadow Link drops a Heart when defeated. Once they have all been defeated, a Triforce Gateway will appear leading to the Baneful Zone's and Den of Trials' final floor. On this floor, there are three Treasure Chests to choose from containing Silver-rarity Materials from the Sky Realm, or; if the entire Den of Trials has been completed from the first floor, there will be eight Chests, each containing a Gold-rarity Material from a different area of the Drablands. At the bottom of whichever Chest he chooses, Link will find the Fierce Deity Armor.

In Link's Awakening for Nintendo Switch, by tapping the game's Link amiibo after speaking with Dampé, Link will be given the +Shadow Link Effect Chamber Stone. If placed while creating a Chamber Dungeon, Shadow Link will appear, and will chase and attack Link until one of them is defeated. Once defeated, he will yield various Rupees and a Fairy.[5]

In the Four Swords manga by Akira Himekawa, Shadow Link was drawn from the Dark Mirror by Ganon to act out his wishes. Shadow Link is a twisted version of Link, born from his own shadow, and is a cruel, malevolent and calculating character. He first appears after causing the Shrine Maidens to vanish, and proclaims himself to be "the hero, Link". Completely avoiding Link's attack, he immediately kidnaps Zelda and sends Link to the Four Sword Sanctuary, from which he observes as Link awakens Vaati. His next move is to lead Vaati's troops to attack Hyrule Castle and send all the Knights of Hyrule to the Dark World. There, he confronts the four Links, revealing himself to be much stronger than they are with their tainted blades, and striking them down with Sword Beams. They are saved by the Blue Maiden, who releases a Fairy to shine light upon him, stunning him long enough for them to escape.

Shadow Link continues to plot, hidden away from the light. As he cannot go out in daylight, he works with Vaati's minions to thwart the progress of the four Links. Using dark magic, he manages to split the four Links apart by sending them to four different lands of Hyrule, thus weakening the strength of the Four Sword. Then, confronting Vio, he attempts to coerce him into joining the side of darkness by appealing to his intelligence. Working with Vio, he traps Red and Blue in the Temple of Darkness, and allows Vio to be placed in charge of the Tower of Flames on Death Mountain. Vio even appears to kill Green in battle, totally convincing Shadow Link that he has turned to the side of evil.

However, Vio is simply putting on a show to gain his trust. Once inside, he learns about Ganon and his potential weakness, and the existence of the Dark Mirror, the source of darkness from which Shadow Link was originally summoned. He also learns that Shadow Link does not desire to follow Ganon, and in fact wishes to rule over Hyrule alongside Vio. Shadow Link simply hates humans and the world for spurning him as "just a shadow". However, after Vio is foiled in an attempt to shatter the mirror, Shadow Link discovers his betrayal and attempts to execute him in by dropping him into the lava of Death Mountain. Saved at the last minute by the three other Links, they confront Shadow Link, and with their new-found strength, destroy him with a combined Sword Beam attack.

Shadow Link is not killed, however, and is pulled by Ganon from the mirror again, dripping and shivering as he tries to resist entering the light. Seeing him in this state, Princess Zelda takes pity upon him. He attempts to spurn her but is momentarily moved by her words as she states that he should not fear the light, as he too is a hero. Driven by a desire to save her from the Dark Cloud, he disguises himself as Vio and aids the three other Links in their battle against Vaati. Realizing that the demon cannot be killed by the Four Sword alone however, he returns to the Dark Mirror, and in an act of self sacrifice he shatters it, destroying both Vaati and himself in the process. Before he vanishes, the four Links thank him, and tell him he will always be a part of them. Shadow Link makes a final appearance on the penultimate page of the manga, appearing as Link's shadow and giving a thumb's up.

Shadow Links appear as Minibosses in Cadence of Hyrule. Shadow Link is also added as a playable character in the Character Pack downloadable content pack.