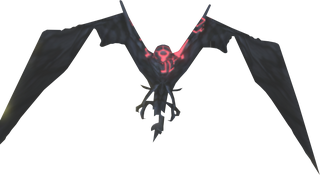 Sword
Bow
Shadow Keese are enemies in Twilight Princess.[1] They are a Twilight variation of the Keese.

Shadow Keese are found only in the Twilight Realm and in areas affected by the stretch of Twilight. They have draconian-like bodies and funnel shaped heads. Their faces are featureless save for red symbols. Their likeness is nearly identical to Shadow Kargaroks except for the fact that they are much smaller, weaker, and lack the ring of grey plumage around their faces. As with many monsters of Twilight, Shadow Keese have a distinctive cry; they make a noise reminiscent of a hammer clashing on metal, as opposed to the squeaking of ordinary Keese.

Shadow Keese behave identically to their non-Twilight counterparts. They patrol the area while flying and approach Link when they notice him, pausing just before they attack. This, however, also gives Link ample time to strike back with the Sword. They can also be shot out of the air using long-ranged weapons such as the Hero's Bow.