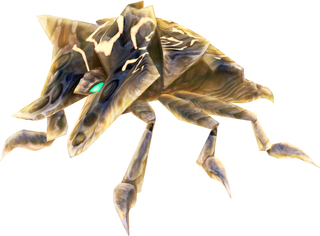 Shadow Insects are the dark creations of Zant made to steal the Light Spirits' light. They are the direct cause of the Provinces being cast into Twilight, as a result of the regional Light Spirits having their light stolen. Shadow Insects can only be seen using Wolf Link's senses. The only way to bring the Provinces back into the light is by destroying the 16 Shadow Insects (12 in Twilight Princess HD) hiding in each Province holding the Tears of Light. The Tears of Light left behind by these creatures can only be held in the Vessel of Light, which is granted exclusively by the Light Spirits.[5]

Shadow Insects have a proclivity for hiding and running away from Wolf Link. When encountered, they may attack Link by tackling him or by emitting an electrical shock. Shadow Insects also possess the ability to fly, and will do so if knocked off of a wall they were clinging to. Certain Shadow Insects require Link to solve basic puzzles in order to force them out of hiding, such as by lighting a fireplace, smoking out any hidden Insects. A small group of Shadow Insects hide within the fireplace inside Barnes's storehouse, forcing Link to ignite the fireplace and inadvertently set the storehouse ablaze, defeating the Shadow Insects in the resulting explosions.[6] Shadow Insects can also hide and move about underground, requiring Link to dig and force them above ground. When found, they can be defeated with Wolf Link's Jump Attack. Defeating one reveals its Tear of Light, which can then be collected into the Vessel of Light.

A much larger Shadow Insect, the Twilit Bloat, holds the final Tear of Light in the Lanayru Province.