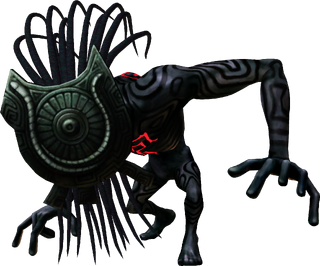 Shadow Beasts are dark, willowy beings that drop out of Portals all across Kingdom of Hyrule and in the Twilight Realm. Most travel in packs but some can be found alone. Shadow Beasts are Twili members that have been corrupted and turned into monsters by Zant.[5] Shadow Beasts are strong enough that only a few were needed to overrun and defeat the scores of Soldiers guarding Princess Zelda, despite the fact that the latter had advantageous numbers. It is also hinted by Barnes that they are not only composed of transformed Twili, but also have the ability to turn Humans into their kind,[6] meaning that they are not restricted to one species.

If one Shadow Beast is left standing during a group battle, it will let out a howl that revives the others.[7] Because of this, at least the last two must be defeated at the same time in order to truly defeat a group.[8] Once there are only a few left, most attacks with a wide area of effect can finish them,[9] although some (such as the Jump Strike or the Mortal Draw) will not. Defeating a group of Shadow Beasts allows Link to warp to the point where they were defeated.

Different Shadow Beasts are seen in the cutscene which shows Zant taking Hyrule Castle and Midna's history of the Twili. These are larger than conventional Shadow Beasts, and bear a different head-dressing; a round silver plate with a special marking on them. However, these monsters are never seen during actual gameplay, so their status and any exclusive powers remain a mystery.

In the Palace of Twilight there are Twili who have not fully turned into Shadow Beasts.[10] They can be transformed back into Twili by bringing a Sol near them.

The Japanese name forShadow Beasts, 影の使者 (Kage no Shisha), alongside their ability to revive fallen Shadow Beasts may be a reference to the phrase 死者を生かす (Shishawoikasu), meaning "to raise the dead."