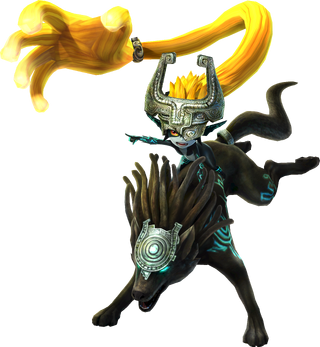 Defeating enemies
The Shackle is a class of Weapon used by Midna in Hyrule Warriors.[name reference needed] It is associated with Darkness. The Shackle is worn as a hair accessory around Midna's ponytail, and enables her to attack her enemies using powerful Twilight magic. A number of her attacks utilize her own hair as a weapon, which she uses to powerfully slam against enemies, as well as to grab them to increase her strength. The Shackle also allows Midna to summon shadow wolves, which she uses for faster travel, as well as to coordinate attacks.[1]

The Lv.★ form of the Shackle is the 8-Bit Red Ring, which is modeled after the Red Ring from The Legend of Zelda. It was added to Hyrule Warriors with the Twilight Princess Pack DLC. In Hyrule Warriors: Definitive Edition, instead of appearing as a separate Weapon, the 8-Bit Red Ring replaces the Thunderhead Shackle when the "8-Bit Weapons" Setting is turned on in Game Settings within the Settings menu.

In Hyrule Warriors Legends and Hyrule Warriors: Definitive Edition, the fourth form of the Shackle is the Thunderhead Shackle, which is associated with both the Elements of Darkness and Lightning.

Midna brings her hair's hand over her head, twisting the arm like a corkscrew, as a large ball of Twilight magic grows and swirls in the palm. When it has reached sufficient size, she bounces it once and then dunks it down onto the enemies ahead. This attack hits a very peculiar range - a circular area some distance ahead of Midna. Enemies directly in front of her, while hit by the bounce of the magic ball, will not be hit by the blast. The attack carries no Element.[verification needed]