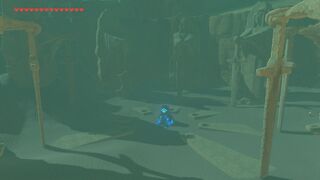 Statues of the Seven Heroines at the East Gerudo Ruins

Protecting the Gerudo people
The Seven Heroines are a group of characters in Breath of the Wild.[citation needed]

The Seven Heroines are known as the divine protectors of the Gerudo people.[1] Massive statues that stand in their honor can be found in the East Gerudo Ruins on the east end of the Gerudo Desert. People once journeyed from around the world searching for the heroines' blessing.[2] Each heroine is said to have a unique power, which are skill, spirit, endurance, knowledge, flight, motion and gentleness.[3] The statues of the Seven Heroines play a role in the Shrine Quest, "The Seven Heroines", given by Rotana in Gerudo Town. Link must solve a puzzle involving the statues to finish the Shrine Quest and reveal the Korsh O'hu Shrine. In addition to the Seven Heroines, there is also a rumor of an Eighth Heroine.[4] Its Statue can be found in the northern Gerudo Highlands.

Deities in The Legend of Zelda series
Community content is available under GNU Free Documentation License unless otherwise noted.
Advertisement