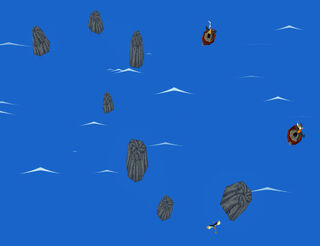 The Seven-Star Isles are a location in The Wind Waker.[1]

The Seven-Star Isles is an archipelago located in the northeastern region of the Great Sea, north of Dragon Roost Island. Near the Isles, a Big Octo is hidden underwater, which, upon defeat, will leave a Piece of Heart behind. In The Wind Waker, a Triforce Shard is found at the bottom of the sea in close proximity to the island after using Triforce Chart 7, obtained in Stone Watcher Island, to locate it. In The Wind Waker HD, Link will instead find a Silver Rupee, worth 200 Rupees, after using Treasure Chart 45 to locate it. Link can also retrieve Treasure Chart 16 in this isle by destroying all the rock-mounted Cannons positioned strategically amongst the isle's rock spires. This is the only archipelago in the game that isn't visited by the Ghost Ship.

In the French, Italian, German and Spanish versions of The Wind Waker, the archipelago is named after Ursa Major.