Zelda Wiki
Register
Don't have an account?
Sign In
Advertisement
in: Caves, Locations, Locations in The Faces of Evil 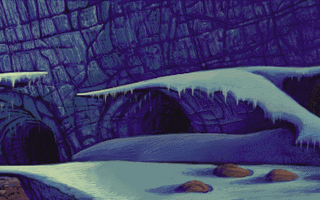 Serigon Caves (pronounced /sɛɹɪˈɡɒn/ se-ri-GON)[1] are a location in The Faces of Evil.[2] They are unlocked after completing Spearfish Falls.

Serigon Caves are a series of caves in northern Koridai, located in a frozen valley close to Nortinka. The valley is densely covered in snow and ice, and dotted with many small Caves. A few of its Caves are pitch dark, requiring the Lantern to see. Deadites and Abominoms inhabit the area and attack Link as he enters, the latter of which can only be defeated with Firestones. The Abominoms drop Snowballs as they are defeated.

The first cave is a dark cavern housing the Ice Crystal, which Odranoel in the Harlequin Bazaar requests for. The second cave holds a bottle of Water of Life, which Link can repeatedly use to recover his health and to refill his Canteen if he owns one. The third cave at the end is blocked by a boulder, which can be destroyed with either 10 Bombs or the Power Glove. At the end of this cave lives Suprena the sorceress, who asks Link to bring back the "treasure of death" from Fortress Centrum. Once he retrieves it, she turns Link's Shield into the Reflecting Shield with the Crystal. A Triforce Map beneath her podium brings Link back to the world map screen. After the stage is completed, Fortress Centrum is unlocked.

Caves in The Legend of Zelda series
Community content is available under GNU Free Documentation License unless otherwise noted.
Advertisement