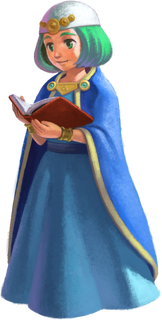 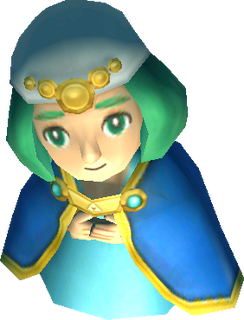 Priest (father)
Seres is a character in A Link Between Worlds.[2] She is a nun and is the daughter of the Priest of the Sanctuary.[3] Seres is calm and sweet, much beloved to her father, Dampé, and even the Captain, who is smitten with her.[4] She turns out to be one of the Seven Sages.

Seres and her father, the Priest, are the caretakers of the Sanctuary. She is much beloved by many, namely her father, Dampé the graveyard keeper, and even the Captain of the Guard of Hyrule Castle. According to Dampé, the Captain often visits the Sanctuary to talk with her father, but it is only a ruse to see her.[4] She remains clueless to this fact.[1]

She first appears when Link comes to the Sanctuary to deliver the Captain's Sword after he forgot to bring it with him from the Blacksmith's house. After greeting Link and learning he is looking for the Captain, Seres enters the Sanctuary to call him, only for the doors to the Sanctuary to close suddenly and lock, preventing any from entering. After hearing Seres scream from inside and at Dampé's urging, Link makes his way to the graveyard to use the secret passageway connecting to the Sanctuary. Once inside, Link witnesses Yuga's abduction and transformation of Seres into a Painting, having already turned the Captain into a drawing on the wall. Though he complains that the Captain's portrait is unattractive, he praises Seres as "perfection".[5][6] Although Link attempts to stop Yuga, the sorcerer outsmarts the hero, temporarily turning into a drawing to cause Link to crash into the wall. With Link knocked out, Yuga swiftly kicks him aside and leaves with Seres despite her father's protests.

After capturing all of the Seven Sages and turning them into Paintings, Yuga spirits them away to Lorule, where he uses Seres's power alongside the other Sages to release the seal placed on Ganon's spirit. Following his merge with Ganon and subsequent acquisition of the Triforce of Power, the resulting creature sends the Painting of Seres to one of the far corners of Lorule known as the Skull Woods, where she is guarded by Knucklemaster. Link eventually makes his way to the Skull Woods and kills the creature, discovering the Painting of Seres in a small, closed-off grove deep within the woods. The hero then claims the Painting, reviving Seres and awakening her to her status as a Sage. She then remains in the Chamber of Sages, awaiting the time when all seven of the Sages would be rescued by Link, at which time she combines her power with the rest to cause the Triforce of Courage to materialize above them. Seres, along with the other Sages, encourages Link and prays for his safety and success in defeating Yuga Ganon.

After Hyrule's Triforce is restored to the Hyrulean Sacred Realm and Lorule is restored following the revival of its Triforce, Seres returns home to her father and is seen celebrating with both he and the Captain at the Sanctuary.

Seres' name name may be derived from Ceres, the Roman goddess of agriculture. Her name may also be derived from Saria, whom she bares a resemblance to, or from "Celeste", meaning "Light Blue".