Zelda Wiki
Register
Don't have an account?
Sign In
Advertisement
in: Hylians, Characters, Characters in The Wind Waker,
and 2 more 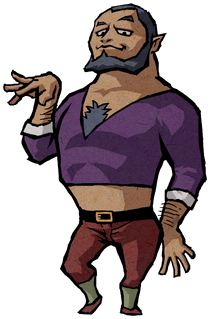 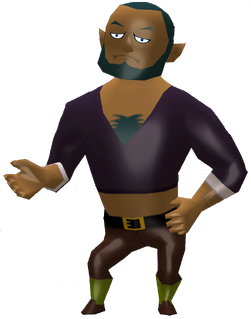 Senza is a recurring character in The Legend of Zelda series.[2][3] He is a dark-skinned, bearded pirate in Tetra's Pirate Crew.

Senza can be first seen aboard Tetra's Ship chasing after the Helmaroc King, which has kidnapped the leader of their Pirate Crew, Tetra. Afterwards, he can be seen aboard the ship, anchored a small distance away from Outset Island arguing with Gonzo. After Link rescues Tetra, Senza can be seen tending to their ship's catapult and once Link and Tetra agree to rescue Aryll, he navigates the ship towards the Forsaken Fortress. When he first speaks to Link, he mocks Link's clothing before mentioning that he's seen an outfit like that on a picture inside Tetra's cabin.[4][5]

Senza appears to be the con-man of the crew due to his persuasive skills and, according to Aryll, Senza is also talented at storytelling.[6] He is seen navigating the pirates' ship as it approaches Outset Island while Tetra is being kidnapped by Helmaroc King.

Senza makes a final appearance in The Wind Waker during the game's ending. After Link and Tetra resurface from the sunken Hyrule Castle, Senza, along with the rest of the pirate crew and a few other characters, greet the pair aboard their pirate ship. Gonzo is then seen steering the ship as Link, Tetra, and the rest of the gang of pirates set sail from Outset Island in search of new lands.

Like the rest of the pirates, Senza bears a striking resemblance to a man portrayed in a wall painting hanging in the sunken Hyrule Castle, which heavily hints that the man could be Senza's ancestor serving under the orders of a past Princess Zelda.

Strangely, even though most of the pirates from Tetra's crew make an appearance in Phantom Hourglass, Senza and Nudge are the only two members of the gang who are nowhere to be seen in the game, but it is safe to assume that they're still with the other pirates.