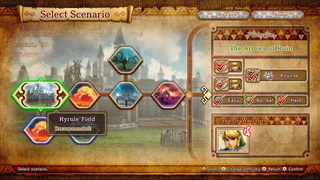 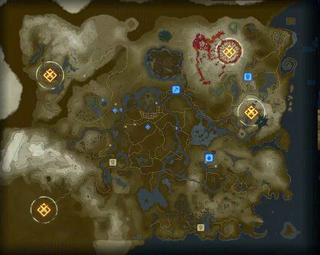 The first icon is one that has two swords clashing together. This one is also larger than the other icons. This icon means that this is a main quest, and a yellow one would mean that it is one that is not completed. Once you press that icon, the player can change the character and cook food to get special effects during the battle.

The second icon is one that has a sword going up. This is a side quest that involves fighting. These have similar settings to main quests. Sometimes, though, you may not be able to change the character. For example, the side quest, "Mipha's Training" only allows the player to use Mipha. Sometimes, you may only use one type of weapons. For example, you may only be able to use Spears or One-handed Weapons However, you are still able to cook. One difference that side quests have is that they show a first clear award, which shows the player the award they will get if they complete in one try. The side quest also tells the player what monsters they will fight.

The third has many different icons, but these ones are ones that don't involve fighting. If it shows a face, then it means that this side quest will help the character who's face is being displayed. The ones with faces will disappear once completed.

There is also a horse icon, which means that by completing that side quest, you will unlock a stable. Stables are not meant to keep horses, however. Stables have merchants that sell different things depending on who the merchant is. The merchant will change after completing a side quest or main quest that involves fighting. Sometimes, there may be no merchants at the stable.

There are several other icons, but those are all side quests too. Most of the time, these quests either unlock a shop, upgrade a weapon, or unlock a new character.

Interface in The Legend of Zelda series
Community content is available under GNU Free Documentation License unless otherwise noted.
Advertisement