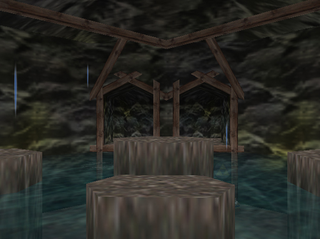 The Secret Shrine can be found in Ikana Canyon, behind the waterfall of the Ikana River. It is accessible only after Link has obtained the Light Arrows, since the door can only be unlocked by shooting a Light Arrow at the Sun Pattern on top of the entrance.

Once inside, Link once again meets the Poe Collector, who informs him that the Shrine is full of creatures that are eagerly awaiting a rematch with him.[3] The Shrine contains four rooms, with each containing a different mini-boss that Link had encountered before. However, Link must have at least a certain number of Heart Containers to battle them.[4]

A Treasure Chest containing a Piece of Heart is revealed at the center of the Shrine once Link successfully defeats all the enemies within.

In Majora's Mask 3D, upon beating all the enemies a second time, the Treasure Chest holds a Fishing Hole Pass instead.