Zelda Wiki
Register
Don't have an account?
Sign In
Advertisement
in: Mechanics, Mechanics in Oracle of Seasons 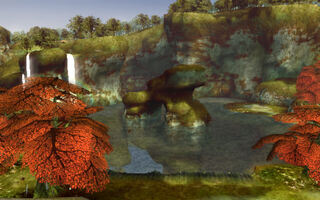 In Winter, some trees lose their leaves and become thinner, allowing Link to pass under them.[7] Some ponds, lakes, and rivers freeze over, allowing Link to walk over them and Snowdrifts may pile up in some places. They can act as a bridge between two places, or as a barrier, preventing Link from continuing.

In Spring, some ponds, lakes, and rivers flood from melting ice, raising the water level and covering brambles and other barriers, allowing some waterways to be navigable without the Flippers.[9] Flowers that were rock hard during the other seasons bloom, and regular flowers can now be chopped down. Also in some places, Blast Blooms flourish, which can be used to rocket Link into the air, granting him access to high ledges.

In Autumn, Rock Mushrooms that were rock-hard during the other Seasons are now ripe for picking when equipped with the Power Bracelet.[10] Leaves fall and cover holes in the ground, which Link can walk over. However, if he stands on a hole for too long, he will fall through.

In Twilight Princess, seasonal changes only affect Hena's Fishing Hole. Each time Link enters the Fishing Hole, the Seasons will advance, starting from Spring. The Seasons affect which types of Fish are available, as the Hylian Loach can only be found during the summertime.