Zelda Wiki
Register
Don't have an account?
Sign In
Advertisement
in: Locations in Skyward Sword, Faron Province, Temples,
and 2 more 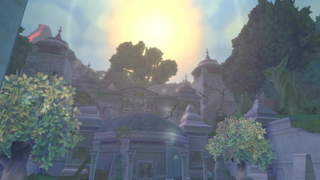 The Sealed Temple,[1] formerly known as the Temple of Hylia,[2] is a location in Skyward Sword. It is located in the Sealed Grounds, deep within Faron Woods, and is where Link initially meets the aged Impa. Zelda confines herself here in the past, where she enters into an era-long slumber until The Imprisoned is destroyed.

Like its sister Temple in the Lanayru Desert, the Temple of Time, it is home to a Gate of Time and acts as a predecessor to the Temple of Time that appears in Ocarina of Time and Twilight Princess,[3] being a time-themed temple where the Master Sword is put to rest. It initially has the same layout as the latter temple, which happens to be built over it.

The Era of the Goddess Hylia

Long ago, in the Era of the Goddess Hylia, a crack opened up in the earth and from the fissure emerged the Demon King Demise and his demonic hordes, launching a brutal assault on the surface and driving the land into deep despair. In order to save the surviving humans from the ravages of the brutal assault, she sent part of the Temple of Hylia and the land it resides on skyward, beyond even the clouds, into the place which would come to be known as Skyloft many years later.[4][5] The section of the temple that remained on the surface became known as the Sealed Temple and rested undisturbed for eons, protected by the goddesses' Sheikah attendant, Impa.

Thousands of years later, in the Sky Era, Link visits the now decaying temple numerous times during his quest, making it a significant location throughout the story. It is the first area of the Surface which he explores, and where he meets an aged Impa for the first time. After receiving the Goddess's Harp from Zelda at the ancient Temple of Time, Link returns to the Sealed Temple and Impa teaches him how to play it.[6] She also guides him as he attempts to reconstruct a second Gate of Time after the first in the Lanayru Desert is destroyed by her younger self.[7][8]

Once the Gate of Time is complete, Link can visit the Sealed Temple in both the distant past and his present. Using this means of time travel, Link is able to plant the Life Tree Seedling in some soft soil in the Temple and acquire the Life Tree Fruit in the present while looking for a means to cure the Thunder Dragon.[9]

After Link collects the three pieces of the Triforce and wishes for the destruction of Demise,[10] the Isle of the Goddess and the Statue of the Goddess return to the surface from Skyloft and completes the Temple's previously damaged entry.[11] Ghirahim appears shortly thereafter, abducts Zelda, and uses the Gate of Time to bring her to the past in an attempt to resurrect Demise there.[12] He is able to disarm Impa in the past and escape the Sealed Temple.[13]

Following his battle and defeat of the Demise in the past and rescue of Zelda, Link bids farewell to his companion Fi as she goes into an eternal sleep within the Master Sword and puts it rest in a pedestal in the rear chamber where Zelda had slept. Impa also chooses to stay in the past and guard the Temple of Hylia. Upon returning to the present with Zelda and Groose, the Gate of Time they came through disintegrates into light and the old lady who was guarding the temple reveals herself to be an aged Impa before passing away.

The Era of Chaos and the Era of Prosperity

During the Era of Chaos, there were wars to obtain the power of the Triforce. To bring an end to these wars, the Ancient Sage, Rauru built over the remains of the Sealed Temple a new Temple of Time, which contained the only entrance to the Sacred Realm, using the Master Sword and three Spiritual Stones guarded by the people of forest, fire and water as keys.[3] Following this was the Era of Prosperity, in which the Kingdom of Hyrule was established and its Royal Family of Hyrule began to watch over the newly established temple.