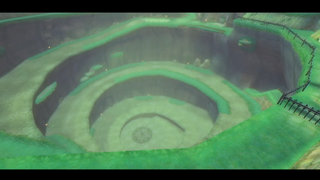 The Sealed Grounds as seen from above

The Imprisoned
Impa
Groose
The Sealed Grounds,[1] once known as Hylia's Realm,[citation needed] is a location in Skyward Sword. Located near the Faron Woods, it is home to an old woman and the seal that holds The Imprisoned.

The Sealed Grounds is the first area on the Surface that Link explores after descending from The Sky. The Sealed Grounds consists of a large pit that spirals downward, lined by a series of air vents,[2] and contains the magical Sealing Spike by which The Imprisoned is held.[3] At the top of the pit is the Sealed Temple, which connects to Faron Woods through a small glade found outside its eastern exit. Throughout his journey, Link returns to this area multiple times to fend off The Imprisoned as it breaks its seal and ascends the spiral path towards the Temple.

After Link acquires the Triforce, which he uses to wish for the destruction of Demise, the Statue of the Goddess breaks away from the rest of Skyloft and descends into the spiral pit of the Sealed Grounds and onto The Imprisoned, killing it and merging seamlessly into the ground from which it was taken.

It is here that he finally reunites with Zelda, and she explains the creation of the Triforce,[5] the war with Demise,[6] the ascension of Skyloft,[7] the sealing of Demise,[8] the creation of Fi and the choosing of a Hero,[9] and Zelda's existence as Hylia reborn.[10][11] Zelda explains that to maintain the seal on Demise, she must enter a sleep that will last thousands of years,[12] and as she does, she asks the young hero to do the very thing she did for him since they were kids - wake her up.[13]

Later in the game, Link learns from the Ancient Robots in Lanayru Gorge that the Life Tree Seedling - whose fruit they hoped to use to heal the ill Thunder Dragon, cannot flourish in the inhospitable Lanayru Province. Link takes the Seedling and returns to the Temple of Hylia to plant it in a mound of soil there,[14] though he is still unable to traverse the Sealed Grounds.

Link travels to the Sealed Grounds a final time after Ghirahim abducts Zelda and flees with her into the past through the Gate of Time. After overwhelming Impa,[15] he escapes through the great doors of the Temple of Hylia to the Sealed Grounds and attempts to resurrect Demise with Zelda.[16][17] He calls forth hordes of enemies to occupy Link while he conducts the ritual to revive Demise,[18] but they are ultimately unsuccessful and Ghirahim is forced to battle Link himself. Link overpowers Ghirahim, but the latter's ritual continues and Demise is awakened.[19] Demise invites Link to do battle, and the area where the seal on The Imprisoned once was becomes a portal to a place where Demise says they "will not be bothered by distractions."[20]

The Sealed Grounds appear as a stage in Hyrule Warriors.