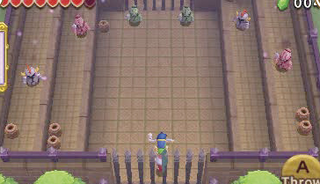 The Sealed Gateway is a Level in Tri Force Heroes.[name reference needed] It is the first Level of the Fortress area.

The Sealed Gateway is the entrance and the castle grounds of the Fortress Area, and is where the Links begin their infiltration of the base. The Level starts from ground Level, where the fortress walls are heavily guarded by numerous Soldier enemies. The Links eventually make their way inside and then to the fortress's balcony at the end, where the Bomb Storage Level takes place.

In Stage 1, the Links begin at a clearing guarded by two Sword Soldiers, where the entrance is barricaded by an iron gate. Two Boomerangs and a Gust Jar can be found at the front of the gate. The gate will lower, and the Stage's Triforce Gateway will open, once the items are taken. Along the rest of the way, the Links encounter Spear Soldiers. A giant, cracked block stands in the way of the fortress bridge, but can be blown up by using two Bomb Flowers that grow nearby. More Sword Soldiers and a Spear Soldier are encountered on the bridge. A Switch must be struck to lower the next gate, opening the way to the Triforce Gateway.

In Stage 2, the Links enter the fortress's courtyard. The heroes walk into an open yard, but are immediately trapped inside as a Ball and Chain Soldier appears. Defeating it lowers the gates, leading to another yard where the Links then fight Sword Soldiers, Spear Soldiers and Bomb Soldiers. The Spear and Bomb Soldiers attack from ledges, requiring that the Links to throw each other over to fight them. After they are all defeated, the gate to the Triforce Gateway lowers.

In Stage 3, the Links appear on a platform standing over the fortress moat. The Links must cross this moat to the other side to get to the next Triforce Gateway. They come across two colored walls: one yellow and one purple. The yellow wall is raised and blocks the Links' progress, but can be lowered by striking the yellow Switch nearby. This will turn the Switch purple, and will lower the yellow wall and raise the purple one. The Links must alternately rise and lower these two walls in order to cross by striking the Switch. One Link can strike the Switch twice to allow the other two to cross. For the third Link to cross, he can stand on the lowered yellow segment, then hit the switch to raise it. On the other side is a Squiddy and two Soldiers, plus another set of the yellow and purple walls. To cross these walls, the Links can form a Totem and throw each other over. A switch on the other side can be hit to lower the walls for the third Link. More Soldiers are encountered on this side, and Soldiers across the moat will also attack by throwing spears and bombs over. On this side is a Treasure Chest sitting on a ledge, which can be reached by lowering the surrounding yellow wall.

The purple wall to the left must be lowered, and on the other side the Links find another switch and a raised yellow wall leading to a ledge with two Jars and a pair of Chests. One Chest contains a Purple Rupee while the other contains three Hearts. To cross the moat, two of the Links must stand on the lowered purple platform, while the other Link strikes the Switch to raise it. On the other side is a lowered yellow platform, which one Link must be propelled over using the Gust Jar. That Link can then carry the other one over using the Boomerang. Once both Links are over the gap, the switch can be struck again to raise the yellow platform and bring them closer. The attacking Spear Soldier and Bomb Soldier from before are encountered here. Two Switches must be pressed down to make stairways appear, allowing the third Link to reunite with the others. The Triforce Gateway lies just ahead.

In Stage 4, the Links enter inside the fortress. The heroes ride a moving platform up, where a couple of Bomb Soldiers attack from the ledges. A Chest nearby can be opened for a Red Rupee. At the very top is a gap with two Switches on the other side, reachable by propelling two of the Links over with the Gust Jar. These switches create a bridge for the third Link. The heroes then reach a narrow walkway over a pit, blocked by two weights attached to ropes. These weights can be swung by using the Gust Jar on them from the right side, allowing one of the Links to cross over to a switch that opens a wall on the left side. The Link can then use the Boomerang to carry the Links over from this opening. Once all three Links are reunited, two Ball and Chain Soldiers appear to fight them. Once they are defeated, the doors leading to the fortress's balcony and Triforce Gateway opens.

The Sealed Gateway includes the following Drablands Challenges: "Evade the Wallmaster!", "Halved attack and defense!", and "Don't drop the pot!".

At the end of the Level, three Treasure Chests can be opened. Two contain the same Material, and one contains another.

Gates in The Legend of Zelda series
Community content is available under GNU Free Documentation License unless otherwise noted.
Advertisement