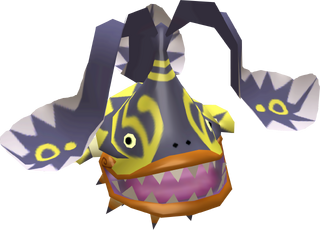 N/A
Seahats are enemies in The Wind Waker.[1]

Seahats are large, bulbous creatures with spiny undersides that roam the Great Sea. Due to their names, and the propeller-like appendages they use to hover over water, Seahats appear to be marine, fish-like version of the earthly, plant-like Peahats.

Seahats usually appear in large numbers off the coast of particular islands such as the Boating Course, Southern Triangle Island, Cyclops Reef, and Horseshoe Island. Highly territorial, they will attack Link if he gets too close to them. Seahats attack by ramming their own bodies into Link's boat, the King of Red Lions, in order to knock him overboard, where he is helpless against the Seahats' unrelenting attacks. When attacking, the Seahats dip their bodies into the water up to their nostrils and propel themselves quickly towards their quarry; however, they do not often gain the element of surprise, as their charging movement creates a loud, whirring sound. Seahats cannot attack Link while he is on land, although they may attempt to do so.

Much like their flora counterpart the Peahats, striking a Seahat with a Boomerang will cut off its propeller-fins, leaving it to swim helplessly in the water. The fins will grow back after a short period, but if a second strike is delivered subsequently to the first, it will kill the Seahat. Alternatively, Seahats can be quickly dispatched with the single piercing of an Arrow, or a well aimed Bomb from the Cannon.