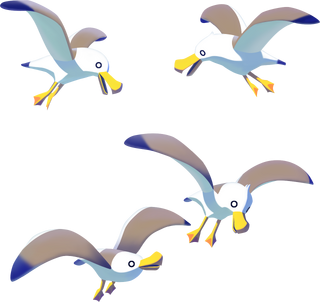 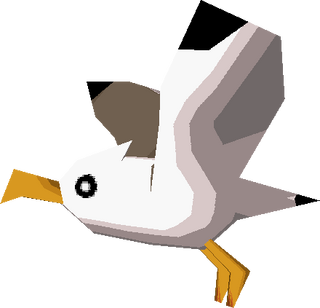 Oceans
Seagull are recurring Animals in The Legend of Zelda series.[1][2] They are the most common inhabitants of sea-faring locations and fly in flocks wherever they are found.

In Link's Awakening DX, Marin transforms into a Seagull during the ending scene of the game if it is completed without dying once.

In Majora's Mask, Seagulls tend to flock around or above areas of significance, such as when Mikau is floating in the Great Bay near death.

In The Wind Waker, Seagulls tend to flock near areas of significance, such as above Big Octos. At the Forsaken Fortress, several Seagulls circle around the window of the room in which Aryll is being held captive. A small flock of Seagulls often fly alongside the King of Red Lions if Link has been sailing for an extended period of time.

Link can control Seagulls by using a Hyoi Pear and, subsequently, can fly as the Seagull itself. In order to obtain a Piece of Heart on Bird's Peak Rock, this must be used to activate several Switches located upon the spire peaks of the island, all of which are located at points only a Seagull can reach. Link can control one Seagull at a time and once he stops controlling the Seagull, he must use another Hyoi Pear in order to control another one. Items collected by the Seagull are brought to Link after he ceases controlling it. If an enemy attacks the Seagull, control will return to Link.

In Phantom Hourglass, Seagulls are found throughout the World of the Ocean King. They sometimes fly alongside the SS Linebeck in flocks of three. Link can shoot a flock with the Cannon to briefly disband it. It recovers after roughly 10 seconds to rejoin the SS Linebeck.

In Spirit Tracks, Seagulls occasionally fly alongside the Spirit Train in the Ocean Realm.

In Breath of the Wild, Seagulls can often be found flying over the Necluda Sea and the Akkala Sea. They usually fly above Treasure Chests found under water. Since they mainly eat Fish, fisherman use a flock flying above the ocean to determine where to fish.[3] Seagulls drop Raw Bird Drumsticks upon death.