Zelda Wiki
Register
Don't have an account?
Sign In
Advertisement
in: Locations in Oracle of Ages, Labrynna, Seas, Locations
English 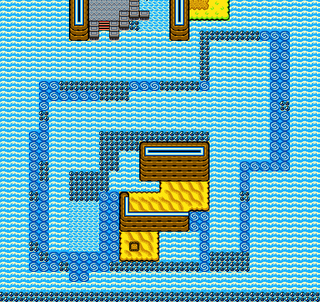 The Sea of Storms in the present time

Oracle of Ages
The Sea of Storms is a raging section of the oceans of Labrynna in Oracle of Ages.[1] It is located east of the Zora Seas, and west of Crescent Island and Crescent Strait. To the north is the South Shore.

Like the rest of the oceanic area of Labrynna, the Sea of Storms is fed by a river that runs across the map. In the past, the source of the water comes from Rolling Ridge. However, in the present time it seems the construction of Yoll Graveyard and the natural development of land have changed the flow of the river, which now originates from the northern Nuun Highlands. It flows into the Sea of No Return and Crescent Strait.

The Sea of Storms is characterized by its violent and unforgiving waters. The sea itself is surrounded by a ring of whirlpools, which will swallow Link up if he gets near.[2] The only way to get inside the ring of whirlpools is via an underwater entrance in the past, which is guarded by a Zora. Therefore, Link must have the Mermaid Suit in order to access the center of the Sea of Storms. To bypass the guard, Link must present him the Zora Scale bestowed upon the hero by a Zora after cleansing the Zora Seas of evil.[3][4]

On the Sea of Storms, Link will come across the ship of the Piratians, who are stranded on the Sea of Storms.[5] Once he boards the ship, he will meet the Cap'n, who will inform the young hero of their plight. Thankfully, Link is able to aid them by giving them the Zora Scale, which is in fact a powerful charm capable of calming the seas.[6] As thanks for helping them escape, the Cap'n will give Link the Tokay Eyeball,[7] then sail off to the land of Holodrum, where Link will meet him again in Oracle of Seasons.[8] The Tokay Eyeball is used to open a cave on Crescent Island that leads to the final dungeon of the game, the Ancient Tomb.[9]

In an ordinary game of Oracle of Ages, Link will be unable to get inside the ring of whirlpools in the present, thus making it impossible for him to complete the map. However, in a Linked Game of Oracle of Ages (when Oracle of Seasons is played first), the entrance to the Sea of Storms will appear in the present instead of the past, as will the Piratians. As such, Link will be able to explore the entire sea. This also means that the Piratians, who have come from Holodrum, will already be acquainted with Link.[10]