Zelda Wiki
Register
Don't have an account?
Sign In
Advertisement
in: Locations in Oracle of Ages, Crescent Island, Labrynna,
and 2 more
English

Sea of No Return

Sea of No Return 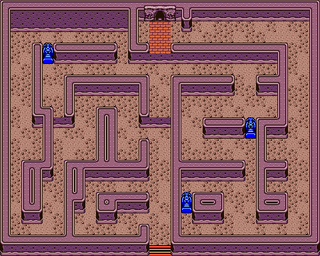 The maze inside the Sea of No Return

Labrynna, Coast of No Return
The Sea of No Return is a location in the past age of Labrynna in Oracle of Ages.[1]

Aptly named, the Sea of No Return is littered with whirlpools and strong currents that will attempt to pull Link to a watery grave. From within the Sea of Storms rises a mysterious maze, overrun with Darknuts and Lynels, some of the game's most formidable enemies. Inside this maze lies the Ancient Tomb, the eighth and final dungeon of the game. The maze inside the Sea of Storms cannot be accessed from the outside, as it is surrounded by a ring of whirlpools both above and below water.

While searching for an alternate entrance to the maze, Link will meet the Piratians and their Cap'n, who have become stranded on the Sea of Storms. Luckily, Link is able to help them escape by giving them the Zora Scale, a powerful charm capable of calming the seas, which he obtained from the Zoras.[2] As thanks for helping them escape, the Cap'n will give Link the Tokay Eyeball, which is said to open the way to the Ancient Tomb.[3] The Tokay Eyeball is placed inside the empty socket of the Tokay statue on Crescent Island. The mouth of the statue will open, revealing the entrance to an underwater cave which will become the Moonlit Grotto in the present. This cave is in fact the passageway to the maze of the Sea of No Return.

The passageway to the Ancient Tomb itself could be considered a mini-dungeon. It is composed of three rooms, each one requiring Link to demonstrate one of the three virtues of the Triforce: the first room, full of Gibdos requires Power; the second one, containing unbeatable enemies, namely Blade Traps and Hardhat Beetles, requires Wisdom; the third one, containing pits and invisible platforms, requires Courage. Once Link passes through the cave, he will emerge from an underwater entrance, inside the ring of whirlpools.

As the flow of time causes the Labrynnian landscape to change, the southern sea will recede from the area. Fittingly, the Sea of No Return and the Ancient tomb are superseded by the Yoll Graveyard and the Spirit's Grave (the first dungeon) in the present.

The Sea of No Return's French name is "Mer des Âmes Perdues", meaning "Sea of the Lost Souls". All other translations respect the area's original name.