Scimitars of Twilight redirects here. For the Sword that appears in Twilight Princess, see Scimitar of Twilight. 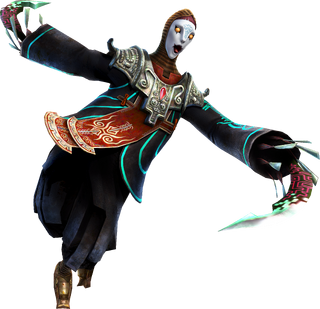 Defeating Enemies
The Scimitars are a class of Weapon used by Zant in Hyrule Warriors.[name reference needed] It is associated with Darkness.

The default Scimitars are the Usurper’s Scimitars, which are directly based on the Scimitars that Zant uses in the fifth phase of his boss battle in Twilight Princess.

The second form of the Scimitars are the Shadow Scimitars.

The third form are the Scimitars of Twilight, which are directly based on the Scimitar that Zant uses to revive Stallord in Twilight Princess.

The Lv.★ form of the Scimitars are the 8-Bit Magic Boomerang, which are modeled after the Magical Boomerang from The Legend of Zelda. They were added to Hyrule Warriors with the Twilight Princess Pack DLC. In Hyrule Warriors: Definitive Edition, rather than appearing as a separate Weapon, the 8-Bit Magic Boomerang replaces the Darkwater Scimitar when the "8-Bit Weapons" Setting is turned on in Game Settings within the Settings menu.

Against Captains and Warriors, Zant cries out in joy as he starts spinning around his enemy. A red Portal appears beneath his target, which summons a dark twister that draws in nearby enemies. Once the attack is finished, Zant sighs in exhaustion. Against Giant Bosses, Zant slashes the boss as he spins into the air, after which he grows gigantically large and stomps his feet into the boss's weak point.

Zant floats into the air and summons two Phantom Zants to aid him in creating a ball of Twilight magic, which the three raise over their heads before throwing down onto the enemies below. The attack hits a circular range directly ahead of Zant.

Upon activating, Zant unmasks himself as he raises his Scimitar and stabs it into the ground before concealing his face again. During his Focus Spirit Attack, he summons a giant Zant Mask from the ground and makes it spin against his enemies. When the Focus Spirit gauge is depleted, Zant hovers above the ground as he begins to grow gigantic in size. He then performs a full body slam against his enemies below, bursting in Darkness energy in the process, before shrinking back to normal size again.

Scimitars in The Legend of Zelda series
Community content is available under GNU Free Documentation License unless otherwise noted.
Advertisement