Scimitar of Twilight (陰りの曲刀, Kageri no Kyokutō?, Shadow Scimitar) is a sword from The Legend of Zelda: Twilight Princess. It is owned by Zant, the usurper of the Twili throne. In the Arbiter's Grounds, Zant appears and sticks the blade into the forehead of Stallord's skeleton, reviving it. When first created, the sword has a soft blue glow to it that turns red once Stallord comes to life. The Scimitar of Twilight serves as Stallord's weak point during the second phase of the boss battle, and after Stallord is defeated, the blade ceases to exist. It releases a Heart Container as it disappears; this may be what gave it the ability to revive Stallord, or be meant to show that the sword was the source of the beast's newfound life.

The Scimitar of Twilight has an eye similar to the Sheikah emblem at the end of its pommel. Eye emblems appear in several other places in the Twilight Realm, although the eye on the Twilight Sword is less stylized than these.

The Scimitar of Twilight is first named in Hyrule Warriors and acts as Zant's level 3 Scimitars which can be unlocked in Adventure Mode. 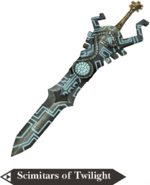 Retrieved from "https://zelda.fandom.com/wiki/Scimitar_of_Twilight?oldid=524639"
Community content is available under CC-BY-SA unless otherwise noted.