This article is about the moveset. For the material based on this moveset and the weapon used for this moveset, see Cia's Staff and Scepter of Time.

"A scepter topped with magic crytals that enable it to be used like a whip. Use the Strong Attack button to temporarily add the darkness element to attacks and make you immune to knock-back."
— In-game description

The Scepter is Cia's default weapon moveset in Hyrule Warriors and Hyrule Warriors Legends. It is sort of a cross between a Magical Rod and a flail. Cia uses it to perform magic, attack enemies with the flail mace on the end of the Scepter, and to create Guardian's Gates in order to summon Dark Links to attack her enemies.

Her default level 1 Scepter is the Scepter of Time. Her Level 2 is the Guardian's Scepter which is topped by a Guardian's Gate.

Her Level 3 is the Scepter of Souls which is topped with Cia's version of the Gate of Souls.

Given there ability to create Guardian's Gates (which act as dimension portals much like the Gate of Time and Gate of Souls) and their association with the Guardian of Time, it is possible that the magic crystals mentioned in its description are actually a form of Timeshift Stone. 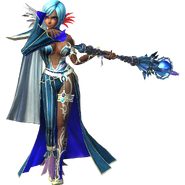 Render of Cia wielding the Guardian's Scepter from Hyrule Warriors 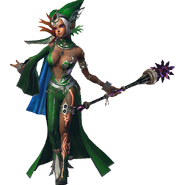 Render of Cia wielding the Scepter of Time from Hyrule Warriors

Cia's Staff, her Gold Material drop based on her default Scepter of Time
Add a photo to this gallery

Retrieved from "https://zelda.fandom.com/wiki/Scepter?oldid=542385"
Community content is available under CC-BY-SA unless otherwise noted.