Zelda Wiki
Register
Don't have an account?
Sign In
Advertisement
in: Hyrule Ridge, Mountains, Locations, Locations in Breath of the Wild 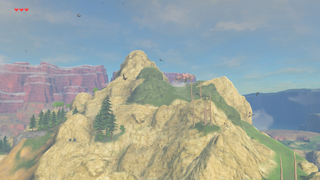 Satori Mountain is a location in Breath of the Wild.[1]

Satori Mountain appears to be much more shorter than the other mountains in the region. It consists mainly of a rocky structure and is full of trees, sporting numerous types of fauna and Materials

Occasionally, a cyan pillar will appear, originating from the top of the mountain. While this pillar is present, the Lord of the Mountain will be resting on the mountaintop. Many Blupees will also appear around the pond during this time.

Satori Mountain is named after the Lord of the Mountain, also known as Satori,[2] which itself derives its name from Satoru Iwata.[citation needed]