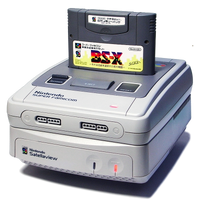 Japan:
• April 23, 1995
The Satellaview was an add-on piece of equipment for the Super Famicom.

The Satellaview service could be accessed via the St. GIGA satellite station between 4:00 and 7:00 PM. The user was required to have a subscription to the St. GIGA station, as well as a BS tuner in order to operate the Satellaview. During this time, users could download and play games. The BS system broadcasted for five years, up until June, 2000. A large catalog of games previously released in cartridge format, as well as a few new games, was made available for download through the service. A deluxe package came with a rewritable 8-megabit memory card that plugged into a slot on the top of the boot cartridge. Without this cartridge, the BS-X cartridge saved downloaded content to its 512 KB of built-in memory.

A feature called SoundLink allowed the use of streaming music or voice clips, most famously used in Ancient Stone Tablets, while playing a game.

Satellaview The Legend of Zelda Games