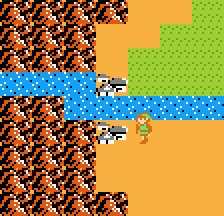 Saria Town from The Adventure of Link

The Legend of Zelda (Valiant Comics)
The Shadow Prince

Moruge Forest
Moruge Swamp
Saria Town,(TAoL)[1] also known as the Water Town of Saria,(TAoL)[2] is a recurring location in The Legend of Zelda series. This small town crosses the river at the northern edge of Death Mountain.

In The Adventure of Link, Saria is the southernmost settlement in Western Hyrule. It borders the river to the southeast of Moruge Swamp. Unlike other towns Link has visited to this point, he will encounter Ganon's minions here. Many inhabitants, notably young women dressed in blue, transform into Ache (called "Eyes of Ganon" by the other townsfolk)[3] after Link talks to them.

In Saria, Link must find a Mirror that was lost by one of the women living here.[4] The mirror is found under a table in the first house of the town's second area. As a reward, the woman allows Link to meet an Old Man[5] who teaches the young hero the Life magic.[6]

The toll guard, known as River Man, only lets townsfolk cross the bridge to Death Mountain, and as such, he won't permit Link to continue his way south into Death Mountain unless he has special permission.[7] In order to cross the river, Link must talk to a man known as Bagu, but his house is empty. Instead it is inhabited by a purple Bot sleeping on his bed. If Link persists in talking to the creature, it will tell him where the master of the house has gone.[8]

Once Link finds Bagu in the forest, he gives a note to Link, which he must show to the guard and thus be able to freely cross the bridge.[9][10]

Main articles: Day of the Triforce and Trust Me

The town of Saria is featured in two stories of The Legend of Zelda comics by Valiant Comics: Trust Me and Day of the Triforce. In Trust Me, Ganon visits Saria and brainwashes the townsfolk into making think that Princess Zelda and Link are monsters who do nothing but viciously attack him and his homeland for no apparent reason.[11][12][13][14] When he notices that Saria's fields are unfruitful, Ganon reminds them that Zelda and Link have done nothing to help them and proceeds to plant a large fruit tree in the middle of a field, claiming that it is just a fraction of his power.[15] He tells the people that he would do more to help them, but because of Link's attacks on him, he must save up his magic.[16] When Link and Zelda arrive to the town, they are rudely greeted by the Saria people and River Man, who calls them troublemakers.[17] Zelda offers to help the People of Saria fix their drought problem, and suggests building a dam.[18] Unfortunately, after the dam is completed, the land is still infertile.[19] Zelda comes to the conclusion that the land must be cursed,[20] and assumes that it's Ganon's doing.[21]

At that moment, Ganon appears and claims that Link and Zelda are once again spreading lies,[22] telling the Saria townsfolk that he will give them the Water of Life, which will heal the town's fields,[23] if they capture Link.[24] The desperate villagers do so at once, but when Zelda saves Rus from being attacked by Ganon, the townsfolk realize their mistake and thank the young hero and the princess after they defeat the Prince of Darkness.[25]

In The Day of the Triforce, a horde of Ganon's minions go to Saria to set fire to the village, as well as capturing and injuring many of its people.[26] When Cassiopia goes to North Palace to inform Princess Zelda of what has happened, Zelda decides to go to Saria to aid Cassiopia and the rest of the citizens. Upon arrival, Zelda encourages the townsfolk to fight back,[27] and together, the princess along with the Saria people successfully defeat all of the monsters.[28]

In The Shadow Prince, the town of Saria is first introduced after Impa suggests that Link go there to find the Mirror of Truth to discover Charles's true identity.[29] The young hero can also be forced to go there by the King of Hyrule, depending on the choices that Link makes throughout the book. Once he arrives to the gates of the town, however, he bangs on the door only to find that no one answers him. The only way to unlock the town's gates is by either using a key given to him by an Old Man while traveling to the Town of Ruto or by using a Magic Potion handed to the young hero in Midoro Swamp. Depending which item he uses to open the gates affects the situations developed in Saria Town.

If Link used the key, he will find himself in a busy town square. An Old Woman will then waddle towards him and ask if he's Link. The young hero notices that her eyes are clear as glass, and the old woman, rewarding Link for his observation, will point to an apple tree located in the Wiseapple Farm that will make Link's eyes as clear as hers.[30] The young hero approaches the tree, which is surrounded by a wide moat bubbling with green slime and sending off a nauseating odor. Once Link figures out how to cross the moat, he will notice something shining in a tree branch and will realize it's the Mirror of Truth, which is what the old lady meant by clear eyes.[31]

If, however, Link used the Magic Potion, a mustachioed man out of the crowd will enthusiastically approach Link and announce to the whole town that Link has arrived, which causes for them to surround the young hero.[32] Link then asks who the man is and how he knew he was coming, and the man introduces himself as Nilbom the Tailor, pointing in the direction of his shop.[33] He goes on to say that the king sent word that Link was on the way, and guesses that if the young hero is looking for something, he will find it in the town meeting hall.[34] Just as Link is following Nilbom, he looks to the tailor shop's window and realizes that Nilbom's name is "Moblin" backwards.[35] Deciding to follow the man will eventually result in Link's death,[36] but by choosing to not follow him will cause for the young hero to return to North Castle exhausted and without the Mirror of Truth.