Zelda Wiki
Register
Don't have an account?
Sign In
Advertisement
in: Songs, Communication Methods, Songs in Ocarina of Time,
and 12 more 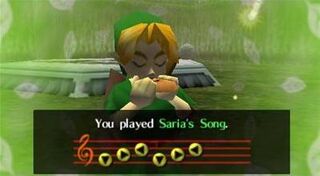 Providing friendship with Saria
Contacting Saria
"Saria's Song" is a recurring song in The Legend of Zelda series.[1] It usually serves as background music for places that are related to forests or woods.

Saria teaches "Saria's Song" to Link as a symbol of friendship when he visits her in the Sacred Forest Meadow in Ocarina of Time. Playing the song allows Link to communicate with Saria at any time.[2] When Link speaks to her, Saria provides him with information about what to do or where to go next in his quest. If Link opts not to speak to Saria, Navi will ask if he wants to speak with her instead.[3]

"Saria's Song" also serves as the background music for the Lost Woods and the Sacred Forest Meadow.

In Majora's Mask, "Saria's Song" appears as the background music for the Woods of Mystery and when Pierre dances with Link. It also plays during the scene where Tatl, Tael, and the Skull Kid are playing in the woods. During the ending of the game, the Skull Kid mentions that Link has the same smell as the fairy kid who taught him that song in the woods,[7] assuming he is the same Skull Kid as the one in Ocarina of Time.

The notes for "Saria's Song" can sometimes appear on a wall in the northern part of Termina Field, where Link can play a song for Rupees.

The song makes a last appearance after the game credits, where the tree stump showing a drawing of Link, Skull Kid, Tatl, and Tael appears.

In Twilight Princess, a remix of "Saria's Song" appears as the background music of the Sacred Grove. Also, the Skull Kid plays the song on his horn from time to time.

In Tri Force Heroes, "Saria's Song" appears as one of the tunes the Lucky Lobby Ball plays when hit with the Sword.

In Freshly-Picked Tingle's Rosy Rupeeland, "Saria's Song" appears as part of the background music of the Deku Temple.[8] A remix of the song also appears as the Bana Bana boss theme.[9]

"Saria's Song" can be heard at the end of the "Ocarina of Time Medley" in Super Smash Bros. Brawl.

In Hyrule Warriors, "Saria's Song" substitutes the victory theme during Darunia's victory animation, where he dances to the music as he did in Ocarina of Time.

When Zelda performs a Special Attack using the Baton, one of the songs that she can play is "Saria's Song".

Saria's Song is based on three main notes, F, A, and B. The tonic of the piece is F, resulting in a scalar mode of F Lydian (a major scale with a raised 4th). Although this is where the piece is based harmonically, it is still overall ambiguous in its harmonization, as accidentals in the harmony later on in the piece suggest that the piece is in fact in C Major and it simply starts on the 4th scale degree and a IV in the harmony. The modal basis of the piece is a way to make the song sound more medieval and removed from classical western music.

The piece is in duple meter and is constructed in binary form (an A section and a B section, with a short intro on tambourine) which is looped "ad infinitum." Both A and B sections are characterized by straight-forward dance rhythms in metric groupings of two. The A section is 8 bars long (in 4/4 time) and the B section is 10 bars long, which can be viewed as a 6 + 4 hypermetric grouping.[10]