This article is about the item from Spirit Tracks. For the item from A Link Between Worlds and the weapon moveset of Toon Link from the Hyrule Warriors series, see Sand Rod and Sand Wand.

"You got the Sand Wand! Tap any sandy area to raise the sand into a wall!"
— In-game description

The Sand Wand, also known as the Sand Staff (サンドロッド, Sando Roddo?, Sand Rod), is an item from The Legend of Zelda: Spirit Tracks.

The Sand Wand temporarily raises solid ground out of a soft sand patch and is found in the Sand Temple. Link can raise sand situated directly under his own feet to get a boost up to a higher level, or to create a path for the possessed Phantom to cross as it normally sinks in sand, provided it is the same height as the raised sand cubes. Quicksand can also be raised, and its sinking effect is nullified. Raised sand can be used to move objects such as large rocks and can stun some enemies that live in sand. It can also unearth Rupees, and, in the Sand Temple, a Small Key and the Boss Key.

The Sand Wand appears as one of Toon Link's weapon movesets available through the Phantom Hourglass & Spirit Tracks DLC pack. It has a Fire Elemental Attribute and it allows Toon Link to summon Sand Blocks and the Spirit Train to aid in battle. The default Level 1 weapon of this moveset is the original Sand Wand from Spirit Tracks. 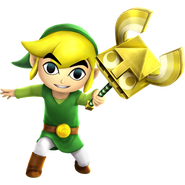 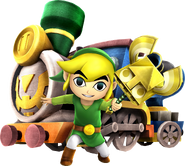 Retrieved from "https://zelda.fandom.com/wiki/Sand_Wand?oldid=542351"
Community content is available under CC-BY-SA unless otherwise noted.